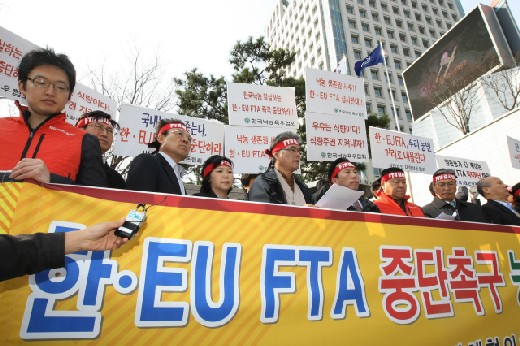 European business leaders in Korea have urged the Korean government to begin talks on amendments to the Free Trade Agreement (FTA) with the European Union (EU), citing overall changes in various industries since the deal first took effect in July 2011.

The members of the European Chamber of Commerce in Korea (ECCK) said they just want Seoul to harmonize its standards with Europe, emphasizing they are not complaining about the Korea-EU FTA or recommending renegotiation.

"After six years, there are certain updates, which are necessary for making both sides more functional to create conditions for fairer entry and play," ECCK Chairman Dimitris Psillakis said in a press conference. Psillakis is the CEO of Mercedes-Benz Korea.

"Our approach is asking the Korean authorities and agencies to support the harmonization, not to change the FTA."

After an ECCK business delegation meeting with European Commission officials in Brussels last week, the ECCK has come up with 90 recommendations in 16 industrial sectors, and stated the suggestions in its recently published white paper.

According to the ECCK, the white paper was distributed to the European embassies in Korea and to the Korean government, including the prime minister’s office and other ministries regarding the issues.

The ECCK demanded the government ease the regulations discussed in the white paper, but Psillakis said the suggestions are not contradictory but complementary to the Moon Jae-in administration’s policies.

ECCK President Christoph Heider said the white paper can be summarized as, "Doing businesses in Korea is rewarding but challenging."

According to the EU Ambassador in Korea Michael Reiterer, who also attended the press conference, 75 percent of Korean and European companies said the FTA has improved their bilateral relationships and allowed them to enhance their services.

In addition, the foreign direct investment by the EU in Korea last year has grown to $7.4 billion, which is three times more than it was in 2015 and is the biggest ever in Korea’s history.

The trade volume between Korea and Europe has increased by 30 percent over the past six years as well.

As unexpected changes have happened of late in various industries, however, the European companies have started feeling the necessity for updates of the Korea-EU FTA.

Heider said there has been no progress since the two sides discussed the need for amendments in 2015.

Reiterer said further discussions are expected to be made in a ministerial meeting between Korea and EU in Brussels, Dec. 7.

He said both sides will also continue with informal approaches.