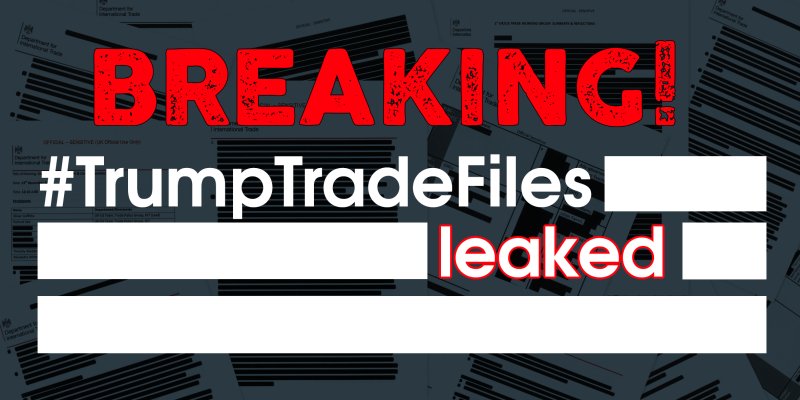 Trade campaigners have welcomed the release of leaked papers detailing trade talks between the Trump administration and British government officials, which show the US government pushing Britain into as hard a Brexit as possible because they see this as the best way of benefitting the US economy. This comes at the expense of standards, protections and livelihoods in Britain.

The leaked papers show US officials calling Theresa May’s ‘Chequers proposal’ for Brexit a “worst case scenario” because it would not allow a sufficient changes to British food standards to give US agriculture increased penetration into British markets (4th working group, p26).

One of the biggest changes Boris Johnson’s made to May’s Brexit proposal was to remove the long-term linking of British and European standards, threatening food and other standards under a US trade deal. The papers show that Johnson made these changes despite economic modelling which suggested this scenario would be good for the US but bad for Britain (5th working group, p97).

The details are leaked versions of the secret papers detailing trade talks between US and British negotiators which were previously only released in highly redacted form (1) and were condemned by Labour leader Jeremy Corbyn as part of the first general election debate. Analysis by Global Justice Now says the papers also show:

Nick Dearden, director of Global Justice Now, said: “No wonder the government didn’t want us to see these papers: they clearly show the British negotiators being bullied by Trump’s administration, and Boris Johnson dancing to the tune of US big business. Boris Johnson’s position on Brexit is clearly dictated by what’s best for US corporations, even when he knows this will be worse for the British economy and British welfare.

“The US is demanding damaging changes to the British economy which threaten our public services like the NHS, our food standards and farmer livelihoods, our access to new cancer medicines, and our ability to tackle climate change. US officials are damning about parliamentary scrutiny over safety standards and are even trying to dictate what positions Britain can take in international fora. Both sides are committed to as much secrecy as possible in these trade talks.

“These papers make a mockery of Boris Johnson’s manifesto pledge to protect British public services and standards – that would be absolutely impossible under the type of trade deal being discussed here. We will continue to force these discussions into the light, so people know what they’re voting for 12 December.”

The unredacted documents can be found below.

(1) Global Justice Now released the redacted documents last month (2) Global Justice Now is appealing the redaction of the US-UK trade papers and the papers of trade talks with numerous other countries at the Information Rights Tribunal on 12 and 13 December. The case has been filed with the First-tier Tribunal (General Regulatory Chamber), case number EA/2019/0154.