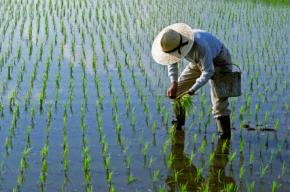 Farmers voiced concerns Tuesday about the day’s decision by the Cabinet to begin consultations with the United States and other countries to forge a trans-Pacific free-trade agreement, saying further liberalization of trade would deal them a heavy blow.

"If we join an international price competition, Japanese farmers, whose (individual growing scale) is generally small, would lose," said Taichi Kumagai, 63, of Oshu, Iwate Prefecture. "It would deliver a devastating blow to full-time farmers."

The Cabinet endorsed a basic trade liberalization stance Tuesday that states it will "act through gathering further information" and initiate "consultations" with member countries of the Trans-Pacific Partnership agreement, including Australia, Chile, New Zealand and Singapore, but it sidestepped making a definite commitment to joining the TPP.

The TPP seeks to scrap all tariffs among member countries in 10 years, with no exceptions for sensitive areas, including rice and dairy products in Japan.

The Japan Agricultural Cooperatives group’s Miyazaki Prefecture branch estimated that if Japan joins the TPP, the value of annual agricultural production from the prefecture would be halved from the present ¥325 billion and production in the livestock industry alone would shrink by ¥130 billion from about ¥180 billion.

Noting many livestock farmers have only just resumed business after Miyazaki’s foot-and-mouth outbreak ended, Toshiro Mori, head of farm policy at the JA local branch, said the industry would suffer a double blow if cheap farm products are imported.