Farmers of La Via Campesina mobilize in Madrid to against EU’s neoliberal trade agenda! 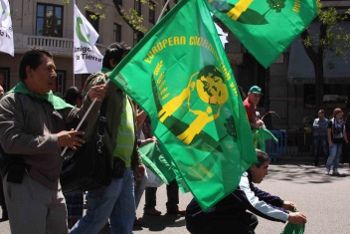 The only beneficiaries such agreements are the same transnational corporations and international financial investors which have caused the current economic, social, environmental and political crisis.

The ideology of infinite growth based on neoliberal trade conditions managed by international speculative funds and banking systems is dead. It is not in the interests of the people of Europe or Latin America to sign the agreements imposed by the European Commission.

Peasant farmers from the Coordinacion Latinoamericano de los Organizaciones del Campo (CLOC) and the European Coordination Via Campesina (ECVC) are united in defending their sustainable family farms, and in building links based on solidarity as opposed to competition. They insist that their role is to produce food for their communities and peoples, and not to allow intermediaries such as food export multinationals and processing industries define food, agricultural and trade policies in their countries.

For food sovereignty, and in defence of rural communities and sustainable family farms!

NO TO FREE-TRADE AGREEMENTS IMPOSED BY THE EU!

FOR AN END TO EUROPE’S NEOLIBERAL TRADE AGENDA!