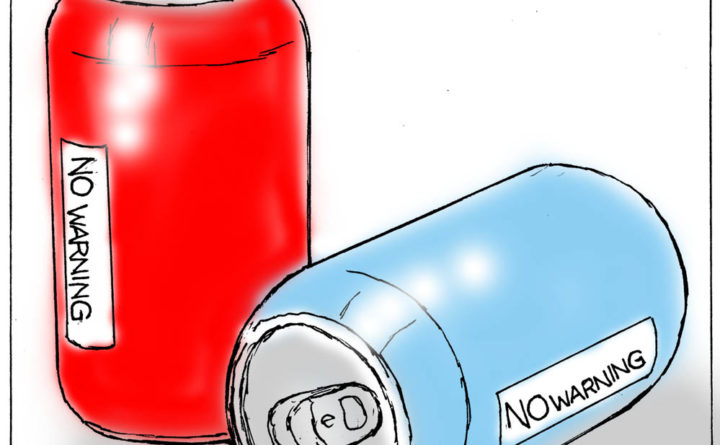 Lately, we’ve heard a lot about tariffs, trade and the Trump administration’s renegotiation of the North American Free Trade Agreement, which it wants to wrap up by the end of April.

How will this deal affect Maine ? Will NAFTA be improved ? With closed-door negotiations and secret text, it’s hard to know. Until now.

On March 20, The New York Times published confidential details on just one chapter, and what it reveals is alarming. Apparently, the junk food industry — purveyors of sugary drinks, salty snack foods, and prepackaged, fatty and hard-to-resist pizzas and other convenience foods — has convinced U.S. negotiators to push for language in NAFTA designed to stop the U.S., Canada and Mexico from requiring effective consumer warnings on sugary drinks and packaged foods.

The Times reports the U.S. wants to prevent any warning symbol, shape or color that “inappropriately denotes that a hazard exists from consumption of the food or nonalcoholic beverages.” At a congressional hearing last month, the top U.S. trade official, Robert Lighthizer, both confirmed the essentials of the Times article and defended the policy.

This anti-labeling policy is unnecessary and inappropriate in a trade agreement, and it’s downright dangerous for our nation’s health.

First, trade agreements should be about international trade, not blocking legitimate domestic public health measures. Inserting this industry-written proposal into NAFTA undermines democracy, particularly as President Donald Trump has asked Congress to extend “fast track” authority, a move that would truncate congressional deliberations and remove much of Congress’ independent authority to review or change the final deal.

Second, this proposal will have serious real-world consequences, leading to premature deaths and the unnecessary expenditure of billions of dollars by families, health care systems and state and federal governments. It targets a proven front-line strategy to tackle the obesity crisis. The labels work by educating consumers at the point of purchase so they seek out healthier food, leading manufacturers to reformulate their products to avoid the warning labels, increasing the availability of foods lower in fat, salt and sugar.

The obesity epidemic affects every state in the U.S. and targets every segment of the population. Nearly 40 percent of the U.S. population is obese. Obesity shortens lives and drastically reduces quality of life, while costing billions of dollars for medical treatment, public programs and lost productivity.

Maine, too, is overweight. We have the highest obesity rate in New England, and more than 30 percent of Maine’s children from kindergarten through high school are either obese or overweight. As the Maine Center for Disease Control testified last year before the Health and Human Services Committee, “Obesity puts a child at risk for high blood pressure, high cholesterol, heart disease, type 2 diabetes, respiratory problems, and other conditions.”

In addition to the human toll this epidemic extracts, it is a huge financial burden. The Brookings Institution in 2014 estimated that 7.9 percent of Maine’s Medicare spending and 11.8 percent of its Medicaid spending is attributable to obesity — or $192 million and $285 million, respectively. That was in 2006. With both health care costs and obesity rates increasing dramatically in the past decade, those numbers are likely much higher today.

Even as the NAFTA talks move toward undermining its authority to do so, the Canadian health agency has initiated rulemaking to address high obesity rates by requiring junk food warning labels. In Mexico, where the burgeoning epidemic was created in part by NAFTA, which led to dramatically increased investment in junk food and ubiquitous fast food joints, consumer groups are suing over the ineffectiveness of nutrition labeling standards.

Meanwhile, states and localities have led the U.S. charge to address the growing crisis, trying everything from mandatory recess and farm-to-school food purchasing, to menu calorie labeling and sugary drink taxes. Legislation to require warning labels on sugary drinks was introduced in Hawaii and New York in 2017.

Is the NAFTA anti-labeling language a coincidence ? I think not. The junk food industry is invoking a tried-and-true strategy, following in the footsteps of the tobacco industry that for years effectively used trade agreements to block labeling rules. Mainers need to stand up to the industry, and its enablers in Washington, to make sure that the renegotiated NAFTA isn’t even worse than what came before.