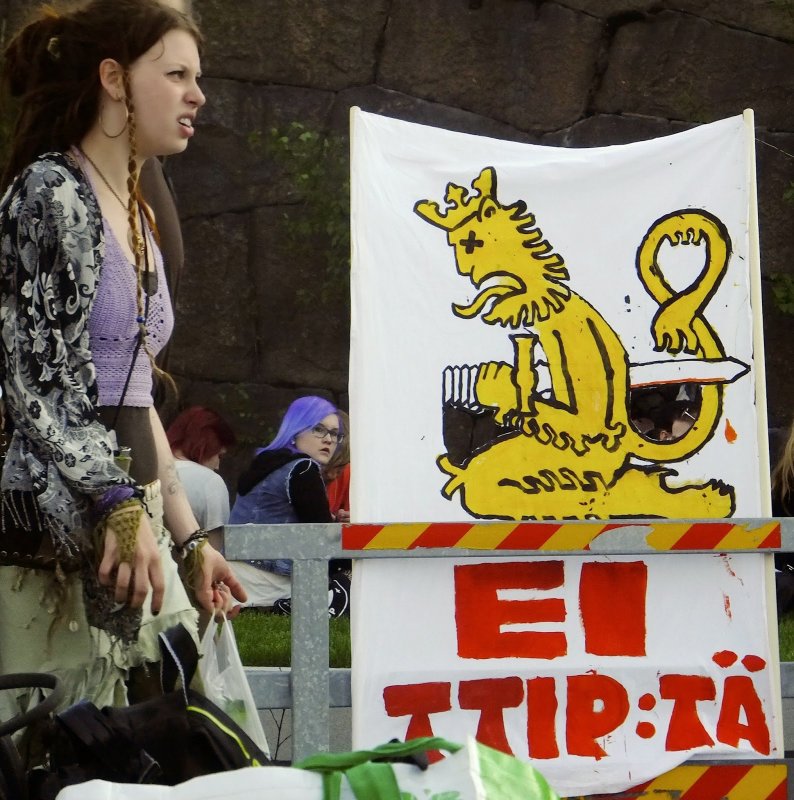 On Friday the 23rd of May 2014, some 1 000 people took to the streets in Helsinki (Finland) to demonstrate against the Trans Atlantic Trade and Investment Partnership (TTIP) negotiations, demanding immediate suspension of the negotiations and opening of the mandate. The demonstration was convened by 10 different NGO’s and networks. [1]

The demonstration rally, which took a peaceful carnival-like form with music and drumming, paraded through central Helsinki during Friday afternoon and captured the attention of bystanders who were given flyers and informed about TTIP and the demands of the demonstration. Ending at one of the main squares in the city, the parade turned into a peoples gathering with political speeches (by activists and MEP candidates) and live music by known Finnish artists.

Despite high amount of participants (in Finnish standards) and quite thorough spreading of information, the demonstration got unwarrantedly little media attention. The national TV-news only mentioned that the demonstration had taken place without any coverage of the demands and concerns of the demonstration or any interviews — although there was a more in-depth (written) interview published on their website. Other news channels had very little or no coverage at all of the event. Notably Helsingin Sanomat, the largest newspaper in Finland, more or less completely ignored the demonstration and has lately systematically been suppressing coverage of any critical takes on the TTIP negotiations. The newspaper for instance refused to publish a critical article written by a University researcher and knowingly ignored a critical pronouncement signed by some 50 researchers, including some of the foremost and internationally known researchers in Finland, which demanded the opening of the negotiation mandate.

Although TTIP as a topic managed to become a part of the EU-election debates in Finland – mostly due to concerns raised by civil-society groups – and despite both positive and critical writings and public events, TTIP remains a quite unknown and opaque issue to most citizens. The demonstration rally on Friday the 23rd of May strengthened the critical voice against TTIP and raised awareness of the ongoing negotiations, but due to the failure of the media to give due credit to the concerns of citizens, further work and action will be needed in order for TTIP and related concerns to become better known to the general public.