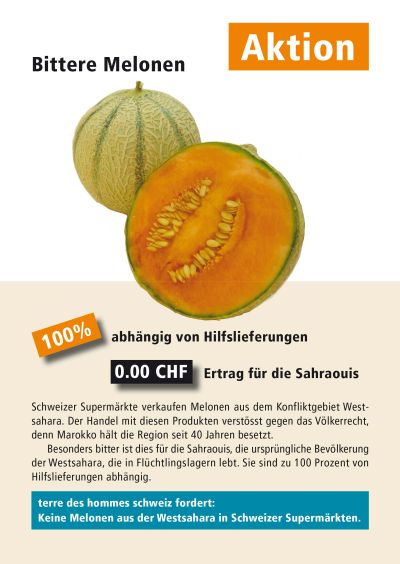 From this winter on, Swiss supermarkets will probably, for the first time, no longer sell tomatoes from occupied Western Sahara.

The large part of the territory of Western Sahara that is currently under Moroccan occupation, is not included in the free trade agreement between Switzerland and Morocco. This fact was confirmed several times by statements of the Swiss Federal Council. Authorities in Switzerland also agree on the implications of these regulations for declaration issues.

The clarity of the Swiss (and other member states of the European Free Trade Association (EFTA)) was referred to in the 13 September 2016 statement from the EU General-Advocate in relation to the EU-Morocco case in the Court of Justice of the European Union. No state of the world, including the EU Member States, recognise the Moroccan claims to the former Spanish colony.

However, imports have indeed taken place, and the Swiss NGO terre des hommes schweiz has over the last year been stepping up the campaign to stop the sales of conflict tomatoes, with success. See their campaign website.

There are two main retailers in Switzerland: Coop and Migros.

As already covered by WSRW earlier this year, Coop stated in a letter that it will withdraw from selling tomatoes from Western Sahara for ecological reasons because of the unsustainable use of fossil water used for irrigation. Coop did not want to make a big deal of the decision and did not declare this change of policy publicly. The decision was still reported by Swiss media (e.g. Neue Zürcher Zeitung, Schweizer Bauer, Luzerner Zeitung).

Before arriving at that decision, Coop had already changed its practice once.In 2013, Coop insisted to keep importing, but promised to label the controversial products “from Western Sahara” . Nevertheless, in 2016, Coop supermarkets were selling tomatoes from Western Sahara declaring them as from “Dakhla, Morocco”. That was until Swiss TV contacted them, prompting them to finally decide to stop purchasing. Coop Switzerland is thus in line with Coops in the UK, Norway, Sweden and Denmark.

Coop Switzerland’s competitor Migros, on the other hand, maintained to terre des hommes schweiz that it is not selling tomatoes from the territory. However, it sells melons that are equally controversial. Migros insisted that by declaring melons from Western Sahara properly, it would be up to the customers decide. But who is informing the customers about the dirty background of these products?

The Swiss NGO then requested customers to contact the retailers, asking them to stop importing products from Western Sahara. A short animation video “The conflict tomato” (to the right) explained the situation in the occupied territory and how to take part in the campaign.

In front of the headquarter of Migros, terre des hommes schweiz informed passers-by about the conflict and about the “bitter melons” in the fruit shelves. When asked they would buy melons from Western Sahara now that they are informed about the occupied territory and the violation of international law, their answers were clear. See the video to the right.

In February 2016, the important Swiss consumer TV programme Kassensturz covered the campaign against the supermarket chains. It was at this point thatCoop had to declare that they will stop selling tomatoes from the Western Sahara from 2017 onward. That season is normally starting by the end of October 2016. WSRW expects that the imports could have been halted by now.