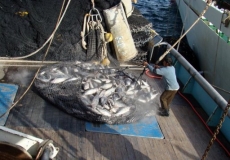 "The meeting is expected to reassess the existing mandates with respect to fisheries issues in the EPA negotiations, finalise negotiating options and provide further direction for Pacific ACP States," explained the Secretary General of the Pacific Islands Forum Secretariat, Tuiloma Neroni Slade.

Director General of the Secretariat of the Pacific Community, Dr Jimmie Rodgers, added that the fisheries resources of the Pacific represent a major source of food and income for Pacific Island Countries, and for many Pacific people these resources are the main source for sustainable economic development.

"It is therefore essential that Pacific countries are able to maximise the return from these resources," said Dr Rodgers.

"Market access opportunities must be found that will provide employment and livelihood opportunities for Pacific communities. This requires the sustainable conservation and management of these resources, so that these opportunities are sustained and provide long-term economic benefits."

The Pacific ACP Trade Ministers, at their meeting in February 2011, agreed to continued negotiations of a comprehensive EPA with the EU as a single region with a view to concluding negotiations by the end of 2011.

"This was an ambitious timeframe, and despite substantial work undertaken to date by your Officials and your Secretariat, we still have a number of unresolved issues that must be addressed to take the negotiations forward," said Secretary General Slade.

"Fisheries issues are one of the key contentious issues for the Pacific region, and must be dealt with if we are to take the negotiations forward. It is important that we seek the best possible deal for our region in these negotiations."

The European Union has been negotiating Economic Partnership Agreements with the African, Caribbean and Pacific States since September 2002.

"The Pacific has been working on these negotiations for over six years," highlighted the Prime Minister for Papua New Guinea, Honourable Peter O’Neill, when opening the meeting.

"The negotiations have been challenging for everyone involved, and to date only the Caribbean has signed a comprehensive Agreement with the European Union."

Of the remaining six regions, some countries have signed interim agreements with the European Union, focusing mainly on the liberalisation of trade in goods. Such is the case with Fiji and Papua New Guinea.

"The interim EPA has proven a great benefit to the Pacific by securing important market access, particularly in fisheries and sugar for these countries - market access that we take as the foundation for the development of a comprehensive EPA," said Prime Minister O’Neill.

But while it secured important market access concessions, the Prime Minister highlighted that the interim agreements signed by Fiji and PNG did not solve some key issues of contention, such as the interpretation of substantially all trade, the most favoured nation clause, treatment of export taxes, standstill clause, rules of origin and bilateral safeguards.

"This is why our countries have committed to continuing negotiations as a single region and to conclude a truly beneficial comprehensive EPA with the European Union."

Prime Minister O’Neill added that the EPAs aim to be development enhancing, and as such, should consequently contain a strong development dimension and take full account of the particularities of individual countries.

"This is a challenging objective, and one which ACP regions have had difficulty achieving, but I’m sure Pacific ACP States can conclude them in a timely manner," said Prime Minister O’Neill.

"In the Pacific, we have a wide range of countries with very unique situations that require special treatment in any trade negotiations.

"It is therefore important that the European Union treat the Pacific region as a special case in these important negotiations."

Pacific ACP Trade Ministers convene tomorrow to consider the outcomes of today’s Joint Fisheries and Trade Ministers’ Meeting, and to deliberate on a way forward for EPA negotiations with the European Union.