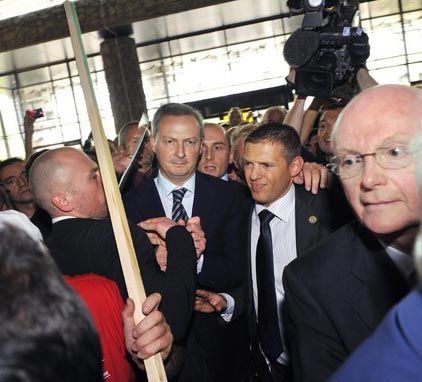 Bruno Le Maire surrounded by farmers at the livestock show

“Agriculture is not a bargaining chip. We will go no further with World Trade Organization talks. We’ll go no further on negotiations with Mercosur” Agriculture Minister Bruno Le Maire told reporters at the 24th International Livestock Show taking place in the city of Rennes. Earlier he had announced plans to provide the French farming sector with financial air for the next three years.

Agriculture has been one of the toughest issues in long-running world trade negotiations and France, along with fourteen EU nations opposes opening up Europe’s highly regulated market to outside competition.

Trade talks between Mercosur and the EU in the framework of a more ambitious political, trade and social agreement took off in 1995 but by 2004 had been suspended, allegedly waiting for a major understanding at the World Trade Organization level.

Talks officially resumed last June in Buenos Aires, following an agreement reached in Madrid in May, in spite of Paris objections and are scheduled to continue next month in Brussels.

The European Union is seeking better market access in Latin America’s emerging economies for its industrial products but has been unwilling to accept more of their agricultural produce in return.