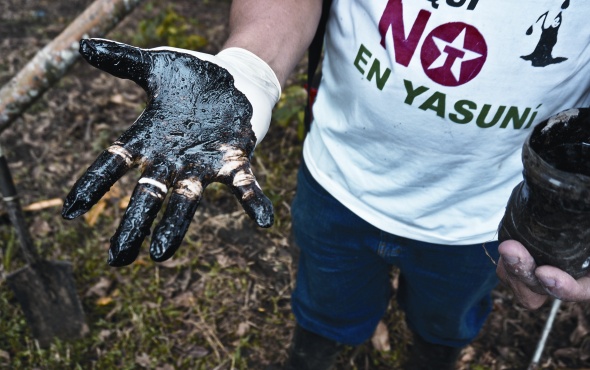 The Global Campaign to Reclaim Peoples Sovereignty, Dismantle Corporate Power and Stop Impunity, including more than 200 movements, networks and affected communities, expresses its strong opposition to the signing of the Free Trade Agreement (FTA) between the European Union and Ecuador.

Immersed in the struggle against global neoliberal policies, of the so-called "free trade", and in recent years, against global trade treaties such as TTIP, TPP, CETA and TISA, we point to a similar neoliberal policy in the EU trade agenda regarding FTAs with Colombia and Peru, which now includes now Ecuador.

Like all free trade agreements, it aims to strengthen an even more favourable framework for opening markets for transnational corporations (TNCs), creating binding mechanisms to protect their investments against the rights of peoples and the rights of nature, protected by the Ecuadorian Constitution.

In recent years the main resource for extraction and trade in Ecuador has been oil. Agricultural resources have also been grabbed such as banana and shrimp. In addition, the way oil has been extracted and the state’s lack of concern, has led to an environmental and social tragedy in the Amazon - polluting rivers, land and air, and contributing to devastation of unique habitats. This has also led to the disappearance of indigenous peoples, through the spread of chronic diseases, among other negative impacts.

The threat of extractive industries has increased even more in this area with the beginning of the oil exploitation in the Yasuní, frustrating the demands of a broad social movement that requested the popular consultation, but also disregarding legal, normative regulation or even formulas such as Natural Reserves or areas of indigenous protection. The dynamics of "free trade" will only accentuate these trends.

In addition, an increased number of energy projects (dams), open-pit mines, as well as mega-infrastructures (roads) are under implementation. All those projects have a tremendous environmental and social impact and the affected communities, women, ecologists, as well as other social sectors, have already mobilized for years against them. As Global Campaign, we endorse their demands and support their opposition to the FTA.

We understand that these treaties only serve to favour European corporations and elites, enlarging inequality and injustice. On the Ecuadorian side, they will only favour the already privileged and enriched agribusiness corporations, among others.

Ecuador was until now one of the countries in the region that had managed to resist FTAs. The Ecuadorian government was able to gather the momentum of a decade of struggles and social movements against the FTAA first and against the FTA with the United States as well as later with the EU FTA, betting instead on policies of regional integration in solidarity.

With the signing of this treaty another dynamic begins. We believe that the current international economic context calls for new solutions, not this path of FTAs. In the medium and long term, as has been demonstrated by the results of NAFTA, this EU FTA will intensify all the problems for the local and national popular economy, as well as represent a loss of sovereignty.