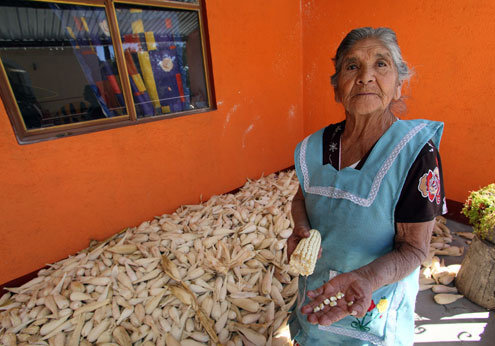 A flood of US corn imports, combined with subsidies that favor agribusiness, are blamed for the loss of two million farm jobs in Mexico. | Heriberto Rodriguez/MCT

"The men have gone to the United States," explained Abel Santiago Duran, a 56-year-old municipal agent, as he surveyed this empty village in Oaxaca state.

The countryside wasn’t supposed to hollow out in this way when the North American Free Trade Agreement linked Mexico, Canada and the U.S. in 1994. Mexico, hoping its factories would absorb displaced farmers, said it would "export goods, not people."

But in hindsight, the agricultural elements of the pact were brutal on Mexico’s corn farmers. A flood of U.S. corn imports, combined with subsidies that favor agribusiness, are blamed for the loss of 2 million farm jobs in Mexico. The trade pact worsened illegal migration, some experts say, particularly in areas where small farmers barely eke out a living.

That is the case in the rolling hills of western Oaxaca state, ancestral lands of indigenous Mixtecs who till small plots of corn, beans and squash between stands of jacarandas, junipers and eucalyptus. Eagles soar in the brilliant blue skies. Clumps of prickly pear and organ cactus attest to the sporadic nature of rainfall.

When a visitor arrives, the gray-haired men on the veranda of the village hall talk about the exodus of young men.

"When they hit 18 and finish secondary school, they leave for the United States or other states of Mexico," Duran said.

His cousin, Jesus Duran, said young men see little future as corn farmers and observe with dismay how the government aims subsidies at medium and big farms, leaving only a trickle for small family farms.

"If you go to the offices over there and ask for help," Duran said, nodding to the local agriculture agency, "they say there isn’t any to give."

Mexican negotiators who signed the NAFTA agreement hoped that small corn farmers thrown out of work by rising imports of cheap U.S. corn would be absorbed into jobs in the fruit and vegetable export industry or in manufacturing.

"That turned out to be incorrect. The numbers of people displaced from family farming were much, much higher than the number of new wage jobs," said Jonathan Fox, an expert on rural Mexico at the University of California at Santa Cruz.

Then U.S. corn imports crested like a rain-swollen river, increasing from 7 percent of Mexican consumption to around 34 percent, mostly for animal feed and for industrial uses as cornstarch.

"It’s been roughly a tripling, quadrupling, quintupling of U.S. corn exports to Mexico, depending on the year," said Timothy A. Wise, the director of research and policy at the Global Development and Environment Institute at Tufts University in Medford, Mass. "Is that a river? Yeah, that’s a lot of corn."

Fox and Wise are among the collaborators on a study, "Subsidizing Inequality: Mexican corn policy since NAFTA," released last autumn.

"The great failure of this supposition is that there wasn’t economic growth that would absorb these people," said Victor Suarez, the executive director of the National Association of Rural Producers, which represents 60,000 small farmers. "The result has left rural areas increasingly populated by the elderly and women."

Faced with deepening poverty, rural migrants have tried to escape regions of Mexico that never used to be sources of emigration.

"In Chiapas, there was hardly any migration before NAFTA," Suarez said, referring to Mexico’s southernmost state. "Farm laborers were even brought in from Guatemala. Now, more than 50,000 rural people from Chiapas go each year to the United States."

Corn imports from the U.S. are only one component of what scholars say is a complex picture. In fact, Mexican corn production has risen since the trade pact, driven by domestic agribusiness and supported by subsidies biased to favor large producers that by one estimate surpassed $20 billion in the past two decades.

The Mexican government also has cash-transfer subsidies, known as ProCampo, for small farmers who are considered the free-trade pact’s losers. But they reach only a portion of small corn growers, a quarter of whom are indigenous.

Some rural farmers no longer have enough corn to sell, sinking into subsistence living for themselves and their families.

"Of my generation," said 33-year-old Baldemar Mendoza, a Zapotec small corn farmer in the Sierra Juarez area of Oaxaca, "many people want nothing to do with farming because it doesn’t pay. With all the changes in the weather, there is no certainty that your harvest will be good."

"The government didn’t so much pull the plug on corn. The government pulled the plug on family farmers who grow corn because the big guys who grew corn got massive subsidies and protection from imports," Fox said.

Their powerful position in the market has kept prices high for consumers, while in the countryside, the social fabric frays as families disperse to find jobs.

The impact, Fox said, "unravels rural communities, separates families and makes it difficult for young people to see a future in their communities of origin."

Josefa Soriano, 74, doesn’t need an explanation of what’s happening. She sees it with her own eyes. As a rural exodus unfolds, families keep fewer of the animals such as goats, cattle and burros that provided manure for fields. Such livestock must have caretakers.

"You have no choice but to buy fertilizer now," she said. "If you don’t fertilize, nothing grows, not even fodder."

As she ambled through the settlement, Soriano offered a running commentary on those who have migrated.

"The village is almost without people," Soriano said. "Many houses are empty. The fathers and the sons have gone."

She turned to a visitor and said, "If the young people always leave, what do you think will happen to us?"