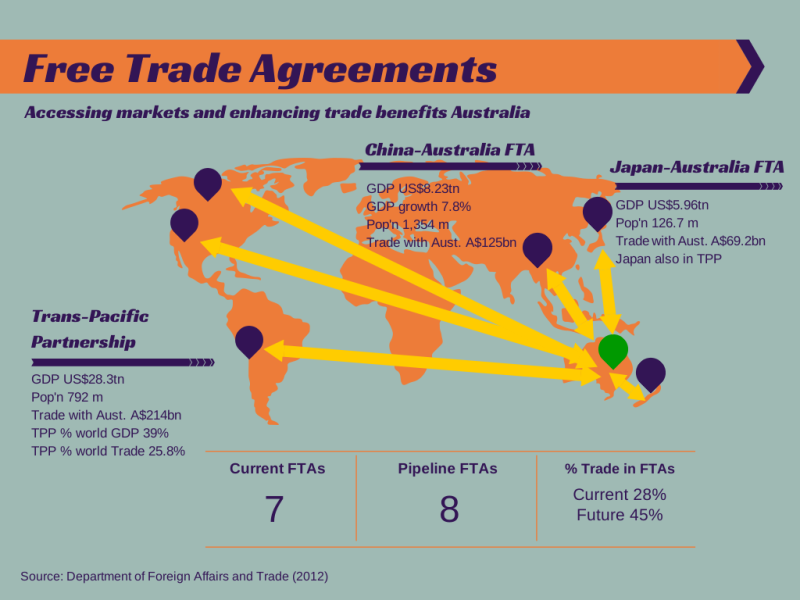 According to Mr Costello, improving market access is critical for the future growth and success of Australian agriculture, given the importance and reliance on exports across all sectors.

“Since being elected in 2013, the Australian government has made improving market access a major priority and after negotiating the free trade agreement with Japan and Korea, China is now the focus, and with future trade growth expected to come from Asia and the Middle East, urgency should be placed on improving access to these markets too,” Mr Costello said.

“Improving market access through FTAs is only one half of the equation though – political and regulatory risks remain in the form of technical trade barriers (TTB), which are often high for agriculture and can be difficult to resolve.

"Technical trade barriers are also less transparent than tariff barriers and can have a greater impact on trade flows," he said.

According to Mr Costello, creating strong relationships on the ground is vital, not only as a stepping stone to increased trade, but also to prevent TTBs.

“There is clearly a need for greater collaboration between all facets of agriculture, domestically within industries, cross-sectorally, and with the government,” he said.

“A co-ordinated and strategic approach to formal negotiations, as well as breaking down TTBs, are critical for the advancement of Australian agriculture.”

The Rabobank report warns that if Australia cannot negotiate a complete reduction in tariffs, like New Zealand has with China, our FTA with the Chinese will not be considered a success.

“A continuing commitment to supply chain integrity and product quality remains the key differentiator supporting trade and global market access for Australian food and agricultural products, which can give us the upper hand on our competitors such as Brazil, the US and India, who have experienced challenges with disease status and traceability concerns,” Mr Costello said.