By a staff reporter

DUBAI - Recently, Free Trade Agreements (FTAs) negotiations are being held between the GCC countries and the USA. Being crucial sectors in these countries’ economies, the banking and financial sectors are being considered for liberalisation in the context of these FTAs.

Up-to-date, Bahrain has already reached agreements with the USA while UAE is expected to do so by the end of 2005. Oman has also initiated FTA negotiations with the USA. The rest of GCC countries (that is, Saudi Arabia, Kuwait and Qatar) might also follow the same route. Dubai Chamber of Commerce and Industry (DCCI) has conducted a comparative research focusing on the characteristics and performance of the GCC and USA banks.

Banking performance can be looked at through loans and deposits. Figure 1 shows to which extent GCC and USA bank loans have been developing as compared to deposits. Saudi Arabia, Qatar and UAE show between 2002-2003 similar growth patterns in bank loans: 20 per cent, 19 per cent and 14 per cent, respectively. The bank deposits of the three countries grew by 16 per cent 13 per cent and 9 per cent, respectively. Although consistent with US patterns, the growth in loans and deposits of these three countries were higher than those of the USA in which loans grew by 7 per cent and deposits by 5 per cent. 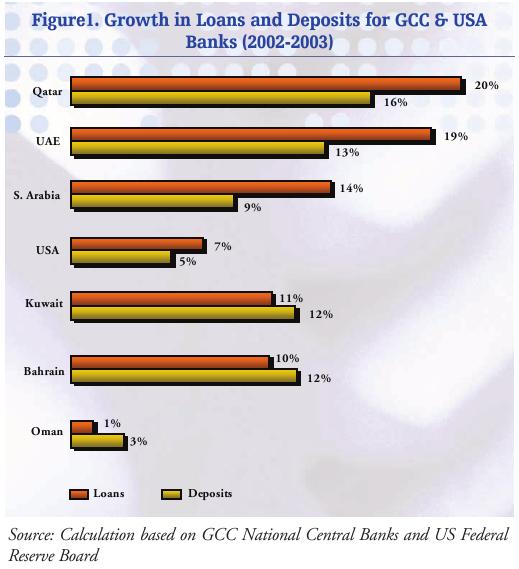 As shown in Table 1, Kuwait, Qatar, Saudi Arabia and UAE have relatively more profitable banking sectors. Return on Assets (ROA) in 2003 ranges between 2 per cent and 2.5 per cent while Return on Equity (ROE) was between 16.4 per cent and 20.8 per cent. Furthermore, their profitability outweighs that of the USA, which has ROA of 1.4 per cent and ROE of 15.3 per cent. This might make GCC banks good acquisition target for USA banks, especially when we compare the non-performing loans (NPLs) for GCC and USA banks. The NPLs of USA are estimated at 1.2 per cent of total loans while those of GCC are ranging between 10 per cent and 20 per cent.

Reducing the level of NPLs by GCC banks would be a smart strategic move. In addition, mergers between GCC banks are one of the tools to face liberalisation as they increase efficiency. International experience showed that it is vital to strengthen the supporting institutional framework in parallel with domestic deregulation and internationalization. This is particularly true in case of regulatory and supervisory government but also applies for the use of the market mechanisms in strengthening financial institutions. Both factors play a crucial role in minimizing the potential risks of opening up, particularly when it comes to dealing with large NPLs.

Finally, the liberalisation of the banking sector must be done carefully given that foreign and domestic financial institutions differ in their performance, strategies and operational focus. Opening up will help local banks to adopt themselves to new environment and develop new survival strategies in the short-term and aggressive market spreading later on. However, if necessary measures are not taken at micro, meso and macro levels, liberalisation might be harmful to local banks. It might be better to first liberalise the financial sector between GCC countries to foster cross-border financial cooperation and then go for international liberalisation.