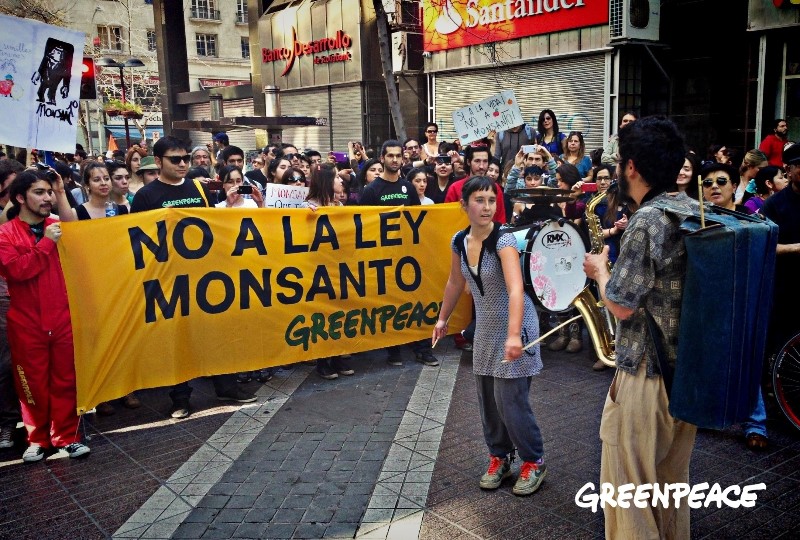 Translated from Spanish by bilaterals.org

The pressure of social movements against the controversial Plant Variety Protection Law is having positive effects. After the Guatemalan Peasant Indigenous Workers Movement (MSICG) presented a motion of general complete unconstitutionality against the law, the Constitutional Court has suspended the so-called "Monsanto Law" which was supposed to enter into force on 26 September 2014.

The Court specifically ruled on Articles 46 and 55 which came into effect on the day that the law was published, suspending them on the grounds that both could lead to serious impacts for the people and the country. Since Articles 1-45 and 47-54 still do not have legal effect, they were not taken into consideration.

The MSICG consider the temporary suspension of these articles as a major step, "given that it eliminates the obstacles to the law’s repeal by Parliament being put forward by the official party and paves the way for Congress, at its next session, to correct its action and legislate in line with the wishes of the Guatemalan people who demand that the law be completely repealed."

The workers movement say that the ideal would have been if the Constitutional Court had suspended the law itself, since as supreme court of the country it has this power. Nevetheless, since it feels that the court’s ruling is already fairly positive, MSICG announces that if Congress does not repeal the law the movement will persist and file another motion of unconstitutionality to eliminate all the other Articles of the law.

On 25 August 2014, the Guatemalan Peasant Indigenous Workers Movement (MSICG) presented a motion before the Constitutional Court against Decree 19-2014 of the Guatemalan Parliament which approved the Plant Variety Protection Law. The motion was filed as an urgency, since the Law was supposed to enter to force completely on 26 September.

The so-called "Monsanto Law" establishes and protects intellectual property over new plant varieties in Guatemala. This means that any plant variety that is genetically modified by artificial selection, cross breeding or genetic alteration could be patented and the patent holder’s right would be last for 25 years. Anyone who produces or reproduced the variety without authorisation would be punished with four years in prison and a fine of 130 to 1300 dollars.

For most Guatemalans, this law is synonymous with poverty and puts the country’s food security at risk, since thousands of families who live by working the land would see their activities curtailed. There is fear that peasant families will be monitored or criminally punished for growing beans and corn, the Guatemalan peoples’ staple food.

Another concern for the Guatemalan movement is that that Law opens the doors for the mass entry of transgenic seeds which will become more accessible to peasant farmers. Largescale cultivation of this type of seeds will contaminate the country’s food production and eliminate native varieties. One can see the connection between these two points and understand how this would benefit Monsanto Company, a transnational corporation headquartered in the US, which is the world’s top producer of transgenic seeds and glyphosate, an herbicide sold under the name of RoundUp.

The adoption of the Plant Variety Protection Law was one of the obligations that the government of Guatemala assumed when it signed the US-Dominican Republic-Central America free trade agreement (CAFTA).