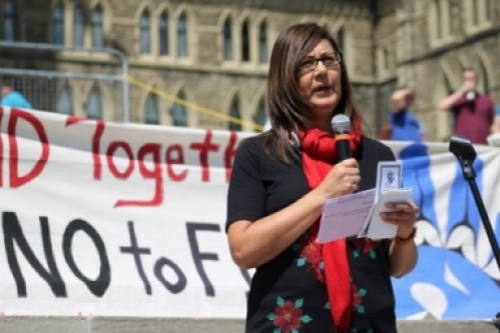 With its focus on the economy, the debate pointed to the Harper government’s big – and thus far spectacularly bad – bet on China.

In 2014, the government gave China a long-term investment deal, called the Canada-China Foreign Investment Promotion and Protection Agreement (FIPA), that is clearly lopsided in favour of China.

In exchange, the government appears to have sought positive signals that China would buy and invest in Canadian resources.

Since the bet was made, resource prices have plummeted and the Chinese economy is in crisis. Chinese demand for Canadian resources has declined, not grown. The bet seems unlikely to pay off for a long time, if ever.

Meanwhile, Canada has been locked into a lopsided FIPA for a remarkably lengthy and anti-democratic term of 15 years. After that term is up, Canada would have to give one year’s notice to get out of the deal and then wait another 15 years for the FIPA’s survival clause to run out.

In other words, the Harper government’s commitments to China were written in the legal equivalent of cement while China’s promises to Canada were written in sand, just before the tide came in.

Why is the FIPA lopsided? Here are a few examples:

Incredibly, the government gave Chinese investors a general right to buy what they want in Canada’s economy without getting the same right for Canadian investors in China. I had never before seen that giveaway, across hundreds of investment treaties.

The government exposed Canadian taxpayers to greater financial risk – in the form of Chinese investors’ claims for compensation against Canada – due to the larger volume of Chinese asset ownership in Canada than vice versa.

The FIPA is not all negative for Canada. It delivers new protections for Canadian investors in China, albeit at a high cost to Canada as a whole. But the FIPA clearly favours China in striking ways. And China’s handsome take from the deal – a legal playing field tilted in its favour – will remain in place for decades.

Why would the government do a lopsided deal?

After a review of the public record on the Harper government’s approach to China, the most charitable explanation I could find was that China promised in exchange to support Canada’s resource sector, especially the oil sands. At least, if there is any other defensible explanation for a lopsided deal, it has eluded me.

Yet, in the months after the government finalized the FIPA, the price of oil dramatically collapsed. To illustrate, the Western Texas Intermediate oil benchmark fell from around $95 before the big bet on the FIPA in September 2014 to around $50 in early 2015, and it now floats in the high $40s.

Oil will bounce back one day, no doubt. However, the Chinese economy itself has recently been battered as its stock market and real estate bubbles began to burst, driving a further decline in demand for resources.

Simply, the pro-China FIPA is an example of the government’s heavy commitment to the resource sector as an overriding economic strategy. The prospect of greater resource exports to China has not panned out. In contrast, the FIPA has harmed Canada’s legal position in competition with China for at least a generation.

There are steps that a future government could take to mitigate Canada’s losses under FIPA, starting with a law that all Chinese compensation claims against Canada must be made public. Yet I doubt those steps will be a priority unless the government hears from voters.