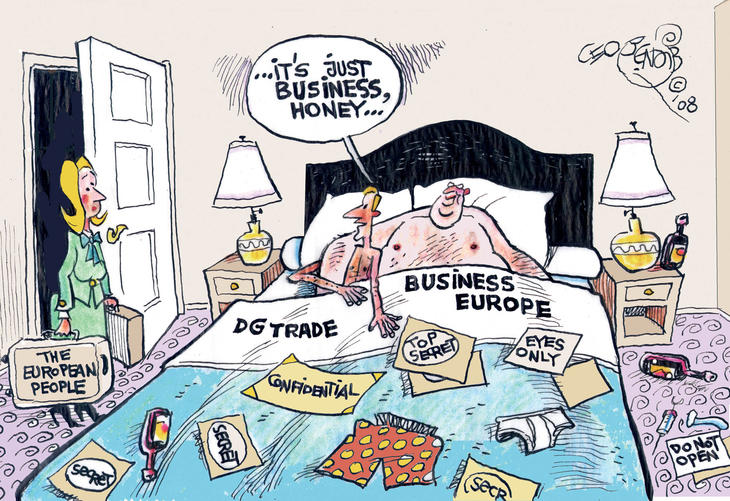 It is an affront to democracy that the European Union is negotiating international free trade treaties in secret. While the public are kept in the dark, big corporations are being given privileged access to influence the negotiations in their own interests. These trade agreements are threatening people’s basic rights to safe food, affordable medicines, a healthy environment and decent work – no wonder the European Commission doesn’t want you to know about them.

Corporate Europe Observatory needs your help to shine a light on these important agreements being negotiated in secret, with big business in the driving seat. Please help us create a more just and transparent EU trade policy.

We have just appealed a court ruling which could deepen the secrecy and corporate influence over the EU’s trade negotiations, at the expense of the wider public interest. But we need your help to raise €5000 to cover our legal costs for the appeal.

We are sueing the European Commission in the EU’s General Court in Luxembourg for withholding information over the ongoing EU-India free trade talks from the public, even though the same information had already been shared with corporate lobby groups. In a ruling delivered in June, the court concluded that the Commission neither violated EU transparency rules nor discriminated against us.

Why are corporate lobby groups allowed access to information that the general public are denied?

We need your donations, however big or small, to be able to successfully appeal this ruling and put an end to the corporate capture of EU trade policy. This is not just about the EU-India free trade talks but the democratic accountability of future EU trade deals in general.

Thank you in advance for your support!