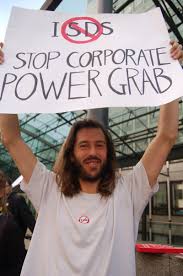 Tuesday, March 26, 2019: “The Australia-Hong Kong Free Trade Agreement and separate Investment Agreement signed today still give special rights to foreign investors to bypass national courts and sue governments for millions of dollars in international tribunals if they can argue that a change in law or policy would harm their investment, known as Investor-State Dispute Settlement or ISDS,” AFTINET Convener Dr Patricia Ranald said today.

“The government claims that the new investment agreement has more safeguards for changes to public health laws than the 1993 investment agreement, which it replaces. The new agreement does exclude tobacco regulation and regulation relating to Medicare, the Pharmaceutical Benefits Scheme, the Therapeutic Goods Administration and the Gene Technology Regulator,” said Dr Ranald.

“But the need for these specific exceptions shows that the general safeguards for other public interest regulation are not effective, and would not prevent cases in other areas, like changes to energy regulation to address climate change or changes in industrial regulation. This increases the rights of global corporations and reduces the right of future governments to make new laws in the public interest,” said Dr Ranald.

“The next steps are for the treaty to be reviewed by the Joint Standing Committee on Treaties and for the parliament to vote on implementing legislation before it can be ratified. AFTINET will analyse the text and make submissions to the Committee. But the likely calling of the Federal election in April will dissolve this Committee before its work is finished, and the review will not be completed until after the election,” said Dr Ranald.

“Labor adopted policy at its national conferenceand in a draft Bill that rejects ISDS and other harmful proposals, and pledges to renegotiate them if it wins government. The policy also pledges to conduct independent assessments of the economic, social and environmental impacts of all trade agreements before they are signed. We call on Labor to implement this policy,” said Dr Ranald.