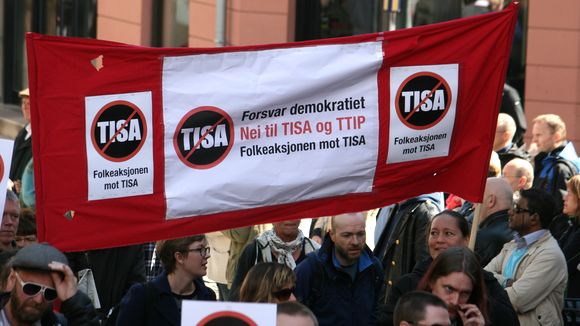 How TiSA strolls off with our services

TiSA, the Trade in Services Agreement, moved into the twelfth round of negotiations. It is by far the most extensive agreement of the treaty collective, including CETA, TTP and TTIP. Fifty, mainly high income countries took part in the secret talks, which were held in Genève from July sixth until July tenth. Also present were the US and the EU, the latter negotiated on behalf of 28 of its member states. Together, these countries are worth two thirds of the global GDP, and more than two thirds of the global trade in services.

How to protect trade secrets

The TiSA negotiations, which have been under way since 2012, took place behind closed doors. Whether these talks will lead to a service agreement or not, the TiSA papers containing the stances of our governments will not be released until five years after the negotiations, this according to Wikileaks. The whistle blowers organisation recently published seventeen classified documentsoffering us a look into the scope of the agreement. The documents reveal the plans that are currently under construction for airline, telecom and financial services. Equally, news website the New Republic reported that TiSA might enable banks to exchange data from EU-customers with companies in other TiSA-countries, such as the US, where privacy regulations are less strict.

Research done by Public Services International (PSI) shows that TiSA’s original textexcludes only those services that are performed under government authority. This means that these services are non-commercial, and that they do not compete with other providers of services. In practice, however, public amenities such as health care, social services, education, postal, waste and water services are often financed through a mixed system that is wholly or partially funded, and tightly regulated, by governments. As a consequence of this, semipublic services do not fall under TiSA’s narrow definition, and henceforth could be privatized at the drop of a hat. This could come at the expense of public access to education, healthcare or water services, which are in fact human rights.

The services agreement TiSA could make it so that liberal reforms, such as the privatisation of water companies, are impossible to undo. In the TNI report ‘Our public Water Future’, the authors emphasise that in the past fifteen years, 235 cities and villages have cancelled privatisations in order to remunicipalise their water services. Accordingly, there are a number of reasons to take water back into public hands, like preventing the decline of services, forgoing insufficient investments, avoiding conflicts on operational costs, skyrocketing water prices, problems of monitoring private management and the lack of financial transparency.

In the same manner as the trade agreements between the EU and Canada (CETA) and the EU and the US (TTIP), TiSA is likely to have a ‘list it or lost it’-structure. Participating countries will have to declare and justify not wanting to outsource water services to the market. When water is not on this negative list, the government will be forced to give both national companies as well as multinational businesses a similar treatment.

The documents leaked during the CETA-negotiations proved that the EU was advocating the liberalisation of water services. After the leak there was an intensification of public pressure, and ultimately water landed on the negative list, thereby escaping privatisation. According to PSI, the federation of trade unions, TiSA is supposed to remove the possibility of averting the private sector by allowing governments only to further the extent of liberalisation.

TiSA countries, including the Netherlands, refer to themselves as the ‘Really Good Friends of Services’, and they are the strongest advocates of the liberalisation of services in the World Trade Organisation (WTO). However, already in 1995 the WTO created an elaborate services agreement, namely the General Agreement on Trade in Services (GATS). According to the Really Good Friends and lobby groups [1], GATS does not take things quite far enough. Research by PSI shows that, thus far, TiSA has three characteristic that go beyond the GATS-treaty:

(1) While GATS allows countries to handpick the service sectors to be liberalised, because of TiSA governments would have to leave all or most of their services to international markets. According to the network Our World Is Not For Sale, the Really Good Friends want for participating governments to outsource at least 90 percent of their services to trade and industry. (2) Additionally, new clauses such as the ‘standstill’ and ‘ratchet’ provisions would make it impossible to cancel current and future liberalisations. (3) On top of this, the GATS provision, which states that countries are allowed to pull back from a commercial relation, would be removed from TiSA. These additions would make it so that a government that signs TiSA can no longer revoke privatisations.

The ‘fair and equitable treatment’ clause

There are two examples to illustrate the conflicting interests between foreign companies and public services. In 2014 the British service company United Utilities sued the Estonian government because the latter would not allow for a raise of water prices. Basing themselves on the ‘fair and equitable treatment’ clause, the company demanded to be reimbursed for a sum of 90 million euro, a number which represented the predicted profits up until the year 2020. It is thanks to a trade agreement between the Netherlands and Estonia, that United Utilities – which has a letterbox company in the Netherlands – can demand compensation from Estonia.

Recently, the Investment Tribunal ICSID judged that Argentina owes the French water- and energy multinational SUEZ over 360 million euro. Because of markups, enormous debts and a lack of investments, the Argentinian government had decided to kick out SUEZ and to reclaim control of the Buenos Aires water services. The ISDS-clause in the investment agreement between Argentina and France makes it so that the government – and, ultimately, the argentine tax payer – will have to pay for the mismanagement of a French multinational.

At the cost of the common good

When the TiSA talks began in 2012, the governments and lobby groups involved hoped for the agreement to be settled in 2014. Due to conflicting interests, it seems that negotiations won’t be finished until 2016. Because of a lack of transparency, analyses have been limited to the leaked documents and a number of independent investigations. It is unsure whether water and other essential services will be liberalised under the authority of TiSA. Also, it remains to be seen whether the ISDS-clause will be a part of the services agreement. What is clear, however, is that already in previous trade agreements the foreign investor was strongly protected. If the service agreement is going to include new clauses such as the ‘standstill’ and ‘ratchet’ provisions it will only increase the power of investors as it will be impossible for governments to cancel current and future liberalisations. For this reason TiSA may very well tarnish the quality, affordability and accessibility of services that are supposed to be universally warranted.

[1] Public Services International writes that after the stagnation of the service-negotiations in the WTO, the American ‘Coalition of Service Industries’ suggested a continuation of negotiations outside of the WTO-framework.