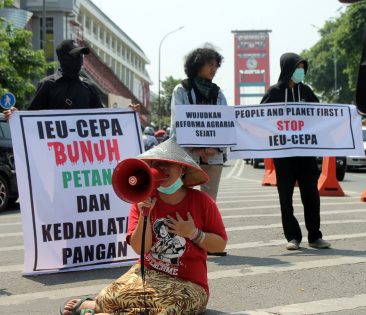 IEU CEPA review must be made based on the human rights, not the interest of palm oil industry

Jakarta, 21 March 2019. The Civil Society Coalition for Economic Justice considers that the interests of palm oil industry should not be the basis of a plan review for economic partnership between Indonesia and the European Union under the Comprehensive Economic Partnership Agreement (IEU CEPA). This will be very unfair for the People.

The planning to review the IEU CEPA should be based on an impact assessment of the overall content from the agreement that will be inflicted on people’s lives economically, human rights, social and cultural.

The Government of Indonesia’s reason to review the IEU CEPA negotiations solely because the palm oil has harmed the social justice of the People because it only benefits of a few elites and oligarchs interest who have been monopolizing the palm oil business.

The contents of IEU CEPA negotiations have extensive aspects, not only talking about Indonesia’s export-import commodity trade, but also the broader aspects related on people’s lives, such as intellectual property rights, agriculture, and food, health and access to affordable medicines, education, digital economy, etc. IEU CEPA also would potentially conflict with the Constitution because IEU CEPA also negotiated the state obligations in implementing economic liberalization commitments through the harmonization of all domestic regulations in order to comply with the contents of international trade agreements.

The verdict of Constitutional Court (MK) No.13/PUU-XVI/2018 revealed explicitly that the state involvement in international treaties must not conflict with the principles of independence, peace, and social justice. Therefore, the planning to review IEU CEPA by the Government of Indonesia based on palm oil issue has neglected the protection of the people rights which have been mandated by the Constitution.

The Coalition also considered that palm oil diplomacy in Indonesia’s International trade agreement had traded off the palm oil industry with other basic rights of the public.

This is reflects on the Indonesia-Europe FTA Agreement (EFTA) which was signed in 2018. The Coalition considers that Indonesia-EFTA is an agreement with the worst transactions where palm oil diplomacy as a priority of negotiation had ignored the basic rights of the public that should be protected by the State. The coalition sees that the IEFTA has swapped the interests of the palm oil industry by sacrificing the people’s right to food.

The 20-40% reduction in palm tariffs for Indonesia in the Indonesia-EFTA Agreement is not an achievement considering the reduction in tariffs must be paid with the loss of farmers’ rights to seeds due to Indonesia’s agricultural seed patent protection rules that are very profitable for Swiss seed corporations such as Sygenta, and certainly has a direct detrimental impact to farmers and Indonesia’s food sovereignty. [1]

The Civil Society Coalition for Economic Justice also urged the Government of Indonesia to ensure that Indonesia’s trade diplomacy agenda based on raw material commodities must be immediately restricted or even terminated. Currently, the concentration of Indonesia’s trade performance on raw commodities, especially palm oil and coal, has resulted in worsening monopolistic practices in both sectors and increasingly accumulate the loss suffered by the community due to human rights violations that occurred from environmental damage, social conflict, and land conflicts.

To date, the contribution of extractive commodities in Indonesia’s trade is still dominated by coal and palm oil at 15.12% and 12.51%, followed by the iron-steel and metal sectors at 3.54% and 3.23% from the total exports, resulting in the low competitiveness of Indonesia’s trade due to only relying on extractive commodities. This dependence also cannot be used by Indonesia to develop the local industry and this has an impact on the national de-industrialization [2]

The increasing demand for palm oil as vegetable oil has encouraged Indonesia to target the European Union as a strategic partner. Palm oil is the most efficient vegetable oil compared to other vegetable oils so it is highly favored by industries that want low prices for their raw materials, further palm oil also has extensive uses not only in food but also, as fuel and raw materials for various chemical industry derivatives. The increasing global consumption of palm oil has resulted in continuous land expansion [3] WALHI’s data noted that the dominance of land ownership by the private sector in the palm oil plantation sector is very high even reaching up to 10.7 million hectares [4]

Plantation expansion resulted in social conflict in the midst of the community due to forced land acquisition and expulsion of local residents. WALHI noted that throughout 2017 there were 302 agrarian-environmental conflicts, scattered in various regions in Indonesia. Various reports and studies have also proved tropical rain forest destruction and environmental degradation due to the expansion of palm oil plantations in Indonesia. WALHI stated that based on BNPB data (2017) there were 2,175 disasters in Indonesia and 99.08% of them were ecological disasters, which affected 3.5 million people.

Therefore, palm oil diplomacy in Indonesia’s international trade policy is not the best solution to improve people’s lives. In fact, in the end, the monopoly of control and exploitative management of natural resources has an impact on the loss of people’s access to land, water, and the sea which is a source of people’s livelihood, then creates a risk for economic sustainability and life as a whole.

IEU CEPA should not limit the government policy space to regulate the economy and take measures to ensure peoples’ right to life, food, water and sanitation, energy, health, housing, education, and decent work. We see that the current negotiations are largely driven by the interests of large transnational companies. Unlimited market access and protection for foreign investment will result in further market concentration and capital. This contributes to socio-economic inequality within and between countries and therefore, this is not a sustainable way or step for the future.

Therefore, on many occasions, the Civil Society Coalition for Economic Justice supports the Government of Indonesia and the Parliament to conduct human rights assessment before and during negotiations on FTA Agreements. Prioritizing human rights for trade and investment to become "redlines" that should not be violated by the State was also conveyed to the IEU CEPA negotiator in February 2018:

"To ensure the protection and promotion of human rights and to support equitable and sustainable development, it is very important that an in-depth assessment of the impact on human rights and environment should be carried out before the end of the CEPA negotiations. The results must coincide with stakeholder input, leading to text amendments to ensure that the agreement is in accordance with the objectives of an equitable and sustainable development as a whole. The required Sustainability Impact Assessment and Human Capital Impact Assessment (HRIA) must be carried out not only ex-ante (before), but also ex-post (after), to evaluate and improve the impact of human rights and environment, which occurred as a result of trade and investment agreement" [5] It also shall not be binding on the government’s policy space to ensure the fulfillment and protection of human rights".