The year 2015 will be key in the struggle against fracking and the TTIP in Europe. Thus, it is essential that we attempt to benefit from both political activity and existing relationships between social groups and experts. This meeting will enable us to improve the coordination of our European network and study its joint strategy in 2015, a year in which the TTIP/CETA/TISA/ISDS will be on the political agenda throughout much of Europe. It is time to condemn the shady arbitrary deals reached by the European Commission under pressure from the transnational companies and their powerful lobbies. 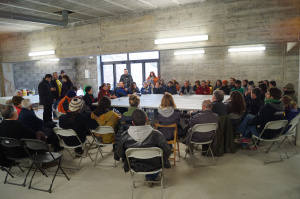 Thus, this event in Barcelona aims to:

Debate the relationship between experts and scientists and popular anti-fracking and anti-TTIP movements, which can help move towards a new idea of territory based on models of energy exploitation.

Foster interaction between the network and parliamentary groups.