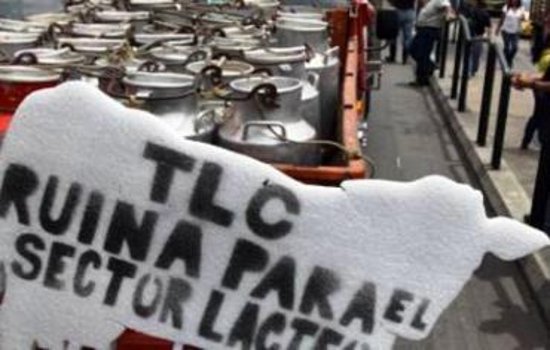 The predictions of hard times for the peasant economy were not exaggerated.

Impacts of the US-Colombia FTA in the farm sector: The portraits

In 2004, Colombia’s Ministry of Agriculture identified those agricultural products that face “serious risks” under the US free trade agreement (FTA). [1]

Afterwards, OXFAM (Garay, Barberi, Cardona) did studies to “estimate” the foreseeable impacts – focusing on the peasant economy – based on the results of the negotiations, which they found “did not take into account a recognition of the assymetries, nor the supposed political importance of Colombia, nor the shared responsibility of the United States in the fight against drug trafficking and terrorism, but only trade issues.” [2]

In 2013, after one year of the FTA, OXFAM (Barberi and others) persisted and published, in “Unmet expectations”, a “risk index and alert system” for incomes of farming families in the context of the FTA. [3]

Going further, OXFAM and Planeta Paz thought it would be useful to document in a book a followup of these studies with concrete testimonies from farmers who would be impacted by the foreseen losses. In other words, they wanted to “put faces” on the realities people were experiencing two years into the FTA.

They chose ten people who had dedicated their lives to farming activities, taking into account ethic, gender and work diversity in the sectors that raised a red flag in the 2013 study: dairy, rice, beans, poultry, white maize and beans. [4]

They identified factors that are common to all sectors: income loss due to a fall in prices, in some branches in anticipation of expected cheaper imports; a rise in input costs; and the trap of unpayable loans. All of these brought about net losses or big dips in profitability as one can see in the simple microeconomic exercise that accompanies each case described in the book.

The evidence shows the real impacts that the US FTA has caused in the most “sensitive” production chains, as they were predicted, as well as the structual problems that the FTA brought to a flash point.

The most vulnerable producers experienced a downward spiral to the point of forced displacement for economic reasons. This came from: declines in production due to a decrease in the use of inputs; loss of work; reduced consumption by households; and non payment of loans. Property has been put at risk and people’s well-being has declined with aggravating factors like violence, megaprojects such as mining or infrastructure development, and even largescale monoculture plantations which are competing for land and water.

The predictions of hard times for the peasant economy were not exaggerated. From what we see here, in places like Boyacá, where the proportion of rural people living in poverty grew from 35.6% to 39.3% between 2012 and 2013, it appears that the FTA was instrumental in bringing about the eviction of thousands of rural families.

The picture described by the interviewees, looking toward the future fallout of the US and other FTAs, whose respective impacts are increasingly difficult to discern, is very problematic. In certain branches, like poultry, not even medium-sized regional-scale businesses have a secure future. This means that this sector, and perhaps others, will end up in few hands, towards the consolidation of oligopolies, which will jointly supply the domestic market with subsidised imports,

Without exception, the protagonists in this book accuse the Colombian state of having abandoned them, as there is no public policy of farm support and promotion. In this context, it’s important to highlight that the organising of unions for collective action, instead of people trying to solve their own problems, is becoming a key issue. The challenge is huge. [5]

[4] The cases chosen were: 1) in rice, the Afrodescendant community of Guachené (Cauca); a medium-sized operation in Meta and a small-scale producer in Palermo (Huila); 2) in dairy, a livestock farmer with 120 cows –for meat and milk– in Caparrapí (Cundinamarca) and a dairy farmer in Sotaquirá (Boyacá); 3) in poultry, a medium-sized operator in Rovira (Tolima) and an organic poultry producer in Fusagasugá (Cundinamarca); 4) in white maize [human food], FENALCE, as a union, and a small indigenous producer in Cereté (Córdoba); 5) for beans, a small-scale farmer in Villanueva (Santander).

[5] This text is an adaption of the presentation and the conclusion of the book “Efectos del TLC Colombia-EE.UU. sobre el agro. Los rostros”. Wirtten by the author as part of an OXFAM and Planeta Paz project.