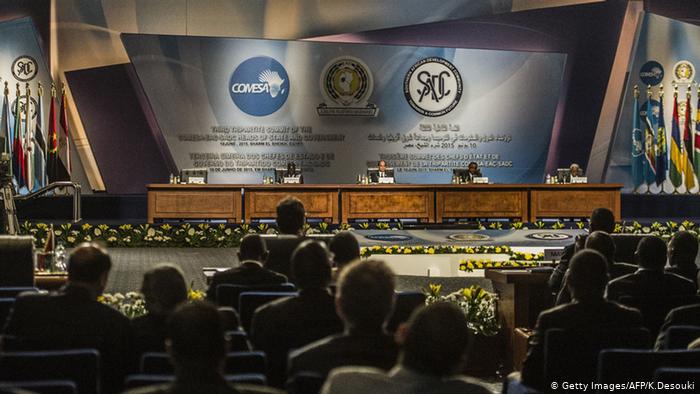 Implementation of the Tripartite FTA agreement now in sight

Lusaka, Tuesday, February 25, 2020: The implementation of the Tripartite Free Trade Agreement is now in sight following a spike in the number of countries ratifying and set to ratify the Agreement. Eight countries have so far ratified the agreement with six remaining to attain the required threshold of 14 for the Agreement to enter into force.

Namibia is the latest to ratify the TFTA agreement, and today, the country’s High Commissioner to Zambia Mr. Siyave Haindongo deposited the Instrument of Ratification to the Chair of the Tripartite Task Force Chileshe Kapwepwe, who is the Secretary of COMESA.

“With the impending ratification by the seven countries, it is my firm belief, that the threshold of 14 ratifications for the TFTA Agreement to enter into force, is now clearly in sight,” Ms Kapwepwe said.

Several rounds of negotiations spanning five years have been taking place with the Tripartite Council of Ministers having earlier set April 2019 as the deadline for Member/Partners States to ratify Agreement.

The tripartite FTA brings together 28 countries that are members of COMESA, the East African Community (EAC) and the Southern African Development Community (SADC).

This is approach is borne out of the realization of the complementarity existing between trade liberalization, competitive industrial production and infrastructure development.

“As Africa moves to consolidate gains to intra-continental trade and make itself competitive, of great significance for our region, is the long-standing commitment of our Heads of State and Government to advance regional integration as an overriding vision for generating increased trade volumes in the Tripartite Region,” COMESA SG said.

Implementation of the TFTA is critical in addressing key constraints to trade in the region, namely; the structure of production and the composition of exports in the member/partner States.

For example, many Member/Partner States in the TFTA have narrow production bases, exporting only a few primary commodities. The Tripartite Model is intended to ensure that the right commodities are produced and competitively availed to the market. In addition, a significant proportion of the States have economies that are resource based with primary commodities accounting for between 40% – 90% of their total exports.

According to the COMESA SG, this has resulted into an expansive extractive sector in the region, with limited linkages to other sectors of the economies. This scenario has rendered many of the Member/Partner States vulnerable to external shocks.

Ms. Kapwepwe called upon the rest of the Tripartite Member/Partner States, to demonstrate commitment by ratifying the Agreement, so that, together, we can consolidate and enjoy the gains that the TFTA has to offer.