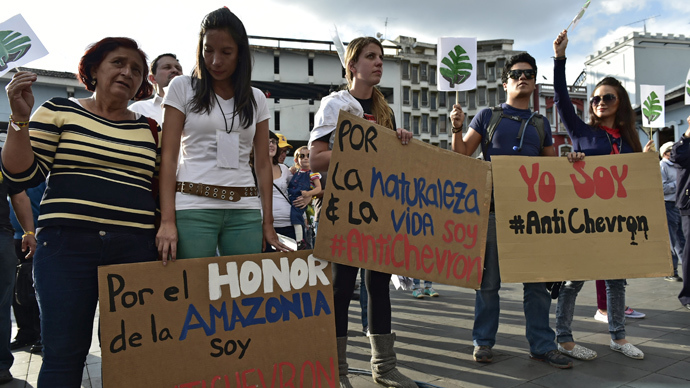 Activists hold signs reading "For Amazonia’s honor I am AntiChevron", "For nature & life I am Antichevron" and " I am AntiChevron" during a protest against US multinational energy corporation Chevron at a square in downtown Quito on May 21, 2014 (AFP Photo)

The biggest frustration for Ecuador’s ambassador to the United States, Nathalie Cely Suárez, in her country’s seemingly endless dispute with Chevron over the cleanup of old drilling sites in the Amazon rainforest, is how effectively the oil company has created doubts about the contamination. “Of course contamination existed, and still exists today,” Cely said in an interview Wednesday. “People tend to forget that the most important thing in this case is people’s lives.”

This week, for the first time, the Ecuadorean government disclosed the results of water and soil testing conducted in 2013 by its experts — the U.S. environmental, engineering and infrastructure consultant Louis Berger Group — at five sites once operated by Chevron predecessor Texaco. Cely told me that she hopes the government’s disclosure, which comes in documents from its ongoing bilateral investment treaty arbitration with Chevron, will shift attention back to the plight of the Ecuadoreans who live in the drilling region and away from the conduct of the lawyers who represented the villagers. “Finally, we have our own proof,” she said. It’s one thing for Chevron to discredit testing by experts working for plaintiffs’ lawyers deemed by a federal judge in the United States to have engaged in fraud. But Cely said, “It’s another story when you have your own report, your own findings.”

Nothing in the Chevron case is simple and straightforward, so, of course, Chevron has its own interpretation of the Ecuadorean government’s test results. The oil company contends that the samples are evidence only of the harm inflicted on the region by the government’s own state-sponsored drilling and its failure to live up to remediation promises. “Rather than take responsibility for their activities,” a Chevron spokesman said in an emailed statement, ” President Correa and his subordinates continue to lay blame elsewhere. The only entities responsible for current environmental and social conditions in the Oriente are the Republic of Ecuador and Petroecuador.”

I don’t possess the expertise to pass judgment on the validity of the Ecuadoreans’ testing protocol or the conclusions the government has drawn from the work of its experts. But it’s worth taking a look at Ecuador’s evidence (and Chevron’s response to it) for the very reason Ambassador Cely cited. I asked earlier this month whether there’s any untainted evidence that Chevron is responsible for an ongoing environmental catastrophe in the Oriente region of Ecuador. The newly disclosed test results are Ecuador’s answer to me and everyone else who has asked that question.

The documents have been filed in a proceeding at the international Permanent Court of Arbitration that will determine how much, if anything, Chevron owes Ecuador for cleanup of oil waste. The arbitration has been split into two tracks, one to determine the scope of a 1995 remediation agreement between Ecuador and Chevron and the other to evaluate Chevron’s claims of fraud in the private trial in Ecuadorean courts that produced a $9 billion judgment against the oil company in 2011. Ecuador originally relied on sampling conducted as part of the private litigation in its briefing in the arbitration. In 2013, the government’s lawyers at Winston & Strawn tasked Ecuador’s experts from Louis Berger to analyze data from those tests and reach their independent conclusions.

Louis Berger’s analysis determined that Chevron’s own data from tests conducted between 2004 and 2007 showed continued contamination throughout the region. Chevron challenged the experts at depositions, noting, among other things, that they had not even visited Ecuador to conduct their own sampling and had no basis for the conclusion that Chevron, rather than Petroecuador, was responsible for the contamination. In response, in the summer and fall of 2013, Ecuador’s experts came to the Oriente to draw samples from the region’s surface water, groundwater and soil.

Of the almost two dozen sites they considered, Ecuador’s experts selected five at which to conduct their tests. Ecuador contends that the five sites were geographically representative of the different topographies of the oil drilling region. They also, according to Ecuador, offered the clearest distinctions between decades-old drilling operations by Texaco’s TexPet and more recent drilling by Petroecuador. Chevron, however, claims that Ecuador cherry-picked testing sites that would yield skewed results, calling into question the validity of the entire sampling effort.

According to Ecuador’s filing with the arbitration panel, Louis Berger found measurable contamination of the soil and water at all five drilling sites, including waste at one site where Petroecuador never operated and at another where the state-sponsored oil operation began drilling years after Texaco closed waste pits. “As a result, although Petroecuador has continued to extract oil from the site, the pollution that has affected and continues to affect the residents was unquestionably put there by TexPet via their initial pits,” Ecuador’s filing said.

Overall, according to Ecuador, “[Louis Berger’s] investigations at these five well sites have demonstrated that, contrary to Chevron’s assertions, groundwater and surface water resources … are not free of chemical impacts, and soil impacts are not confined to localized areas within the oilfield facilities,” the filing said. “Contamination resulting from TexPet’s E&P activities was widespread and is persistent.”

Cely, the ambassador, said “it will be impossible” for Chevron to discredit these test results. “The reputation of Louis Berger is well known,” she told me.

She’s correct that Chevron has not launched the sort of attacks on Louis Berger that it made on some of the experts for the Ecuadorean villagers in the private litigation. Nor does Chevron dispute in its response to the Louis Berger findings before the arbitration panel that the Oriente is contaminated — though it does contend that Ecuador’s experts made erroneous assumptions about where residents of the sampling areas get their water. But the oil company and its scientists argue that Ecuador’s experts cannot extrapolate region-wide conclusions from five carefully selected sites, and — most fundamentally — that Ecuador’s results do not and cannot distinguish between waste purportedly created by Texaco’s long-ago operations and contamination due to Petroecuador’s more recent drilling. “It is not scientifically possible to age-date crude oil to the time of TexPet’s operations,” a Chevron spokesman said in an email.

Petroecuador, according to Chevron, has a disastrous environmental record, and the Ecuadorean government — unlike Chevron — has not fulfilled its cleanup responsibilities. If there is still remediation to be done, Chevron says, it’s Ecuador’s job.

These filings are not the last word in the arbitration. Briefing and hearings on the first issue — the scope of the old cleanup agreement between Ecuador and Chevron — were completed earlier this year, so the arbitrators may issue a decision any time. But the panel ordered both sides to produce additional briefs on the legitimacy of the $9 billion verdict against Chevron in light of the affirmation of the verdict by Ecuador’s highest court and the contrary conclusion by U.S. District Judge Lewis Kaplan in Manhattan that the verdict was procured through fraud. (The villagers and their former lawyer, Steven Donziger, have both said they are appealing Kaplan’s ruling.) The arbitrators are not scheduled to hold hearings on the verdict until 2015, and that’s assuming that the entire case is not resolved by their decision on whether Chevron faces additional liability under the terms of the remediation deal.

In the meantime, I think we can all agree with Judge Kaplan that “improvement of conditions for the residents of the Oriente appears to be both desirable and overdue.” No matter which side is responsible for its cost.

Alison Frankel updates On the Case multiple times throughout the day on WestlawNext Practitioner Insights. A founding editor of the Litigation Daily, she has covered big-ticket litigation for more than 20 years. Frankel’s work has appeared in The New York Times, Newsday, The American Lawyer and several other national publications. She is also the author of Double Eagle: The Epic Story of the World’s Most Valuable Coin. Alison Frankel is a columnist for Thomson Reuters. The views expressed are her own.