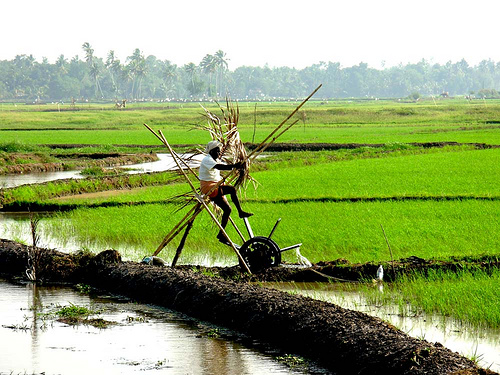 Thiruvananthapuram : India’s signing of an economic pact with the ASEAN nations has evoked strong criticism from Kerala Chief Minister V.S. Achuthanandan, who said Thursday that the pact was "detrimental" to the agriculture sector in the state.

Hours after the free trade agreement (FTA) was signed with the 10-member Association of South East Asian Nations (ASEAN) in Bangkok, Achuthanandan told reporters here that it would lead farmers in the state to commit suicide.

"This is certain that it would be detrimental to the interests of the already beleaguered farmers in the state and it would once again lead them to commit suicide," he said.

Earlier in the day, the FTA was signed in the Thailand capital of Bangkok by India’s Commerce Minister Anand Sharma and his counterparts from the ASEAN-member countries.

The agreement will be effective from Jan 1 next year and import tariffs of the products covered would be eliminated between 2013 and 2016.

The critics of the FTA say it would affect the agriculture sector in the state as cheaper products will be dumped from foreign markets.

State Agricultural Minister Mulakara Ratnakaran said this would lead to the natural death for agricultural activities in the state.

"None knows anything about this agreement and none has been taken into confidence," said Ratnakaran.

There would be widespread protests against the FTA, he added.

Earlier in the day, Achuthanandan said in Kozhikode that the central government ignored Kerala’s fears over the FTA.

"The decision by the centre to go ahead with it, without looking into the fears of Kerala, is not right," he told reporters.

Achuthanandan met Prime Minister Manmohan Singh in New Delhi Aug 3 and apprised him of the apprehensions of the state over the agreement.

During the meeting, the prime minister assured him that the "interests of Kerala farmers will be taken care of" and a copy of the text of the FTA would be given to the state.

However, Achuthanandan claimed none of the promises has been kept.

"Manmohan Singh agreed to give us a copy of the text of the FTA. But we haven’t received it yet," he said.