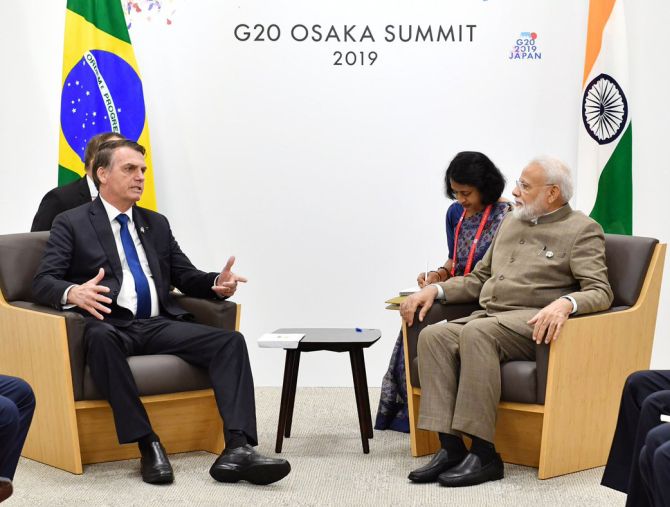 According to officials involved in the planning of the visit, the two countries hope to take their partnership to ‘the next level’ and build on the relationship between Prime Minister Narendra Modi and President Bolsonaro, who met twice in 2019.

India and Brazil will upgrade their strategic partnership with an “action plan” and sign a Bilateral Investment Treaty (BIT) when Brazilian President Jair Bolsonaro visits as the Chief Guest of the Republic Day celebrations from 24-27.

According to officials involved in the planning of the visit, the two countries hope to take their partnership to “the next level” and build on the relationship between Prime Minister Narendra Modi and President Bolsonaro, who met twice in 2019.

“Our bilateral relations are based on a common global vision, shared democratic values, and a commitment to foster economic growth of both countries. Bilateral relations were elevated to a Strategic Partnership in 2006, heralding a new phase in India-Brazil relations,” said the Ministry of External Affairs statement announcing Mr. Bolsonaro’s visit from January 24-27 in Delhi. First BIT since 2015

According to the officials, the Strategic Partnership Action Plan will serve as an “umbrella agreement”, for plans between the two countries to increase defence cooperation, technology sharing and a logistics agreement.

The Bilateral Investment treaty will be one of the first that the Modi government will sign since 2015, when it decided to scrap all existing treaties with 83 countries, and brought in a new “Model BIT”. Since then India has been able to sign BITs with Belarus and Kyrgyzstan, has concluded an agreement with Cambodia, and is negotiating treaties with about a dozen other countries.

Brazil and India will also exchange a Social Security Agreement (SSA), first signed in March 2017, to allow investments in each other’s pension funds, to help business processes and encourage the flow of investment. In 2018 Indian investments in Brazil were around U.S.$ 6 billion and Brazilian investments in India are estimated at U.S.$ 1 billion, the MEA said, adding that bilateral trade stands at about $8 billion.

Of particular interest will be any discussion held on climate change cooperation between the leaders, given Mr. Modi’s stated commitment on combating global warming, and the Brazilian President’s stand rejecting scientific studies on climate change. Last year, Mr. Bolsonaro decided not to host the COP-25 UN climate talks, and although Brazil joined the India-led International Solar Alliance (ISA), it was done under his predecessor President Michel Temer. ‘Far-right’ beliefs

While Mr. Bolsonaro is known internationally for other controversial “far-right” beliefs on gender and orientation, and rights for indigenous tribes, he could face protests in India over Brazil’s complaint at the World Trade Organisation against New Delhi’s subsidies to sugarcane farmers.

Brazil is the largest producer and exporter of sugar, and claims Indian subsidies are inconsistent with global trade rules.

According to the programme, Mr. Bolsonaro will be accompanied by 7-8 ministers, including the Mining Minister and Agriculture Minister who have already arrived in Delhi to negotiate agreements to be signed at the end of bilateral talks on January 25. Among about 20 agreements set to be exchanged, are the Strategic Partnership Action Plan, along with the BIT, a Mutual Legal Assistance Agreement (MLAT) on crime, agreements on double taxation avoidance, bio-energy or ethanol production, cybersecurity, health, mining, oil and gas exploration and investment, and animal husbandry.

Mr. Bolsonaro will attend the Republic Day parade and the At Home hosted by President Ramnath Kovind on January 26. On January 27, he will also address the “India-Brazil Business Forum” and is expected to travel to Agra to see the Taj Mahal.