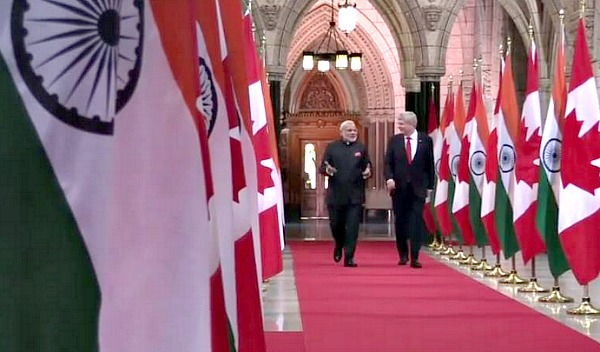 As governments in Canada and India herald their progress on a free trade agreement, promising to have it worked out by September, opponents from both countries are preparing to unite in their efforts to stop the deal.

The deal has been in the works since 2010, and proponents say it will open up trade between the nations while protecting companies in the respective countries.

But Brent Patterson of the Council of Canadians, an Ottawa-based public advocacy group, said such deals put corporations ahead of people by neutralizing the government’s power to enforce things like pollution regulations through investor state provisions.

Investor-state dispute provisions in such agreements are of particular concern, because they allow companies to take governments to secret arbitration for things like loss of future profits if, for example, a government passes a law that harms the companies’ business interests.

Patterson said that could apply to things like banning certain pesticides and other pollution prevention measures, among other situations.

The Council of Canadians is now in talks with Focus on the Global South, an organization working to protect the rights of people in the Southern Hemisphere’s developing nations with offices in Bangkok, New Delhi and Manila.

The aim is to get both organizations working together, possibly with others, to try to prevent the CEPA between Canada and India from being finalized.

Canada and India have been in talks to sign an agreement for more than five years, but India’s previous government had stalled the process after a few high profile lawsuits with foreign companies.

One lawsuit saw the government lose a court case against United Kingdom telecom company Vodafone over hundreds of millions the government alleged was unpaid in taxes.

"It prompted a review of the impact of investor-state provisions and bilateral investment treaties and really put a hold on them," Patterson said. "There’s a long list of egregious examples where investor-state has been used by corporations to challenge the public interest."

But Stewart Beck, president and CEO of the Asia Pacific Foundation of Canada, said the agreement would provide a stable base and security for companies from Canada and India to expand business and create jobs in both countries.

A former Canadian high commissioner to India, Beck said that huge potential exists for trade and economic opportunity between the two countries in everything from lentils to jet engines.

Canada’s current exports to India are about the same in value as they were to China 15 years ago, and since then exports to China have soared, he said.

"I expect the same sort of thing could happen in an Indian context," Beck said. "If we ever were to export energy, those numbers would ramp up quite dramatically."

Beck doesn’t agree with Patterson’s concerns that the deal puts business ahead of the public interest, and stressed that a strong economy is in the public’s interest.

But Patterson said there are other issues to consider.

"Pollution of the air, water and land is going to be a concern to anyone anywhere in the world," he said.