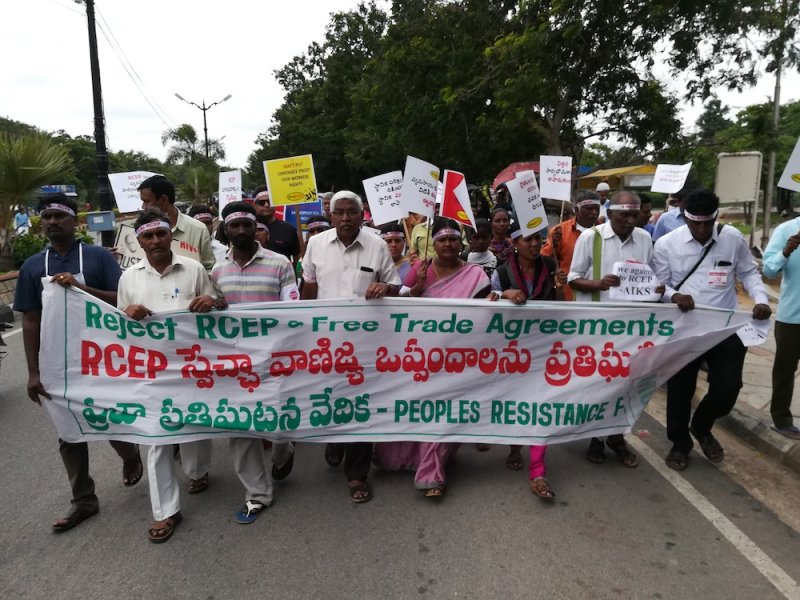 People’s movements note with deep concern the developments with respect to India’s position on the proposed Regional Comprehensive Economic Partnership (RCEP). GoI is also hosting an informal bilateral summit between President Xi Jinping of China and Prime Minister Narendra Modi at Mamallapuram, Tamil Nadu, 11-12 October that coincides with the RCEP Ministerial Meeting at Bangkok scheduled 10-12 October, which is being attended by the Minister for Commerce and Industry Piyush Goyal. India is expected to cut duties on about 74-80 per cent of goods imported from China when RCEP comes into force, despite India’s trade deficit.

We note that there has been hectic activity in India as a possible build-up to sign RCEP, with every indication that the Government of India (GoI) is now ready to join this mega regional FTA. Meetings have been held on RCEP at New Delhi amongst different ministers, with the Prime Minister and even at the headquarters of the ruling party. It is very worrisome that since the RCEP negotiations were launched in 2012, this is the first time that India seems to be closest to signing RCEP despite continued lack of consultation with ordinary people. India is going through a major economic slowdown. Across manufacturing sectors, be it automobile, steel, electrical and electronics, garment, textiles and leather industries hundreds and thousands of workers are being retrenched. Going ahead with RCEP will only aggravate the crisis.

Meanwhile, the Thai Government is hosting meetings on RCEP, with all the trade negotiators on Thursday and Friday and the 9th RCEP ministerial-level meeting on Saturday this week. Thailand as the current Chair of ASEAN is keen to announce finalisation of RCEP at the ASEAN Summit in November this year. India has been under pressure to come on board by that time. The Prime Minister of Thailand announced the theme of Thailand’s Chairmanship in 2019 as “Advancing Partnership for Sustainability”.

The democratic deficit in the decision-making on India’s stand at RCEP is what has kept people out of the process. Even at this critical juncture in the talks, only hand-picked industries and experts have been invited to give their views, rather than a full public disclosure of either the proposed chapters or GoI’s position on them and eliciting of opinions from major stakeholders – the people. The signing of international or regional treaties should not be limited to being an exclusive executive act. RCEP should be discussed in the Parliament of India, State Legislative Assemblies and all relevant departments must be involved. But most of all, people’s voices need to be heard. And they are saying a clear ‘NO’!

RCEP, is focussed on an economic alliance in the Asia Pacific region, without adequate attention to the social and ecological costs. Its coverage is wide-ranging, from chapters on agricultural trade and intellectual property, to investment protection and dispute settlement. RCEP is outside of the World Trade Organisation (WTO) and goes far beyond WTO rules in coverage, while further restricting domestic policy space in basic areas, such as food, health, public services and employment.