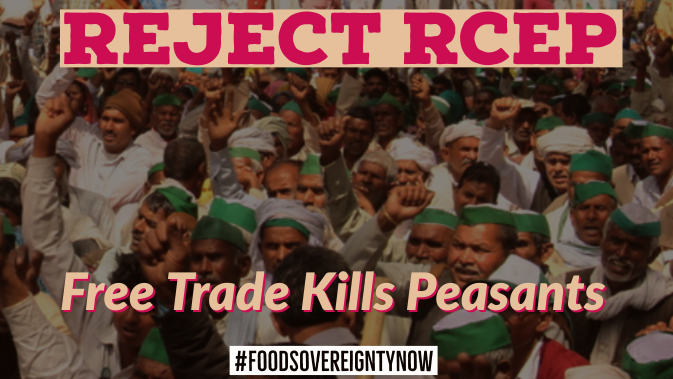 Reacting to the developments in Thailand, with countries in RCEP negotiations deciding to go ahead for now without India, farmer leaders in India stated that this is a good development, and that India will not lose in any manner. They reiterated their demand that India stay out of the RCEP deal. “We will not accept any further negotiations by the government, and this is not just about RCEP but other Free Trade Agreements too, including the one being negotiated with USA”, said Yudhvir Singh of Indian Coordination Committee of Farmers’ Movements (ICCFM). Farmer leaders claimed it as a victory of farmers’ movements in India and other movements who kept up the pressure on the Indian government to prioritise citizens’ interests over investors’ and corporations’, through large scale protests and direct actions.

ICCFM had given a call of action on 24th October when widespread anti-RCEP protests were organised by all members of ICCFM in their respective states. From now on, ICCFM will maintain this momentum of opposition to RCEP and other FTAs in coming days till India finally withdraws formally from the negotiations.

“We will not accept this Regional Comprehensive Economic Partnership in any form, and India has to withdraw from RCEP negotiations completely. The government will face increased agitations and resistance from farmer movements otherwise”, warned Yudhvir Singh of Indian Coordination Committee of Farmers’ Movements (ICCFM).

“We are happy that RCEP is for now going ahead without India, but the threat of RCEP has not gone for ever. As per the news reports from Bangkok, it will be finalised at the 36th Round of ASEAN Summit scheduled for February 2020 in Vietnam. Almost every sector in agriculture (including plantation sector), dairy and manufacturing has opposed the RCEP. It is unclear why India should continue to pursue negotiations on this trade deal, for whose benefit. Analysis of the past FTAs is clearly showing that we only have increased trade deficits with FTA partners, after the FTA is signed and implemented. Further, there have been significant price crashes for our farmers. While the government seems to believe that India will also benefit from increased exports, past FTAs have clearly shown that such agreements have not out-performed overall export growth in any manner, and the utilisation rate for what is negotiated for exports is very low. Meanwhile, what the government really has to worry about is the import deluge that we will be subjected to. We should not forget that elsewhere in the world, national leaders are boldly prioritising their citizens’ and country’s interests and walking away from deals being negotiated or even deals made in the past. There is a free trade deal being negotiated between EU and USA which has kept agriculture out of the deal. We demand once again that India stay out the RCEP deal as well as other FTAs for our overall economy’s interests”, said Yudhvir Singh.

The worries of farmers’ movements pertain to direct impacts on milk producers as well as other producers like that of plantation products (oil palm, coconut, pepper, cardamom, rubber, coffee etc). There will be impacts on oilseed producers with cheaper palmolein products from south east asia and threats to wheat and cotton producers too. There are also concerns around farmers’ seed rights and seed freedoms if RCEP pushes India towards a UPOV regime, due the fact that other countries in the pact are already aligned with the UPOV regime of IPRs on seeds. While it is being said that the IPR provisions have been re-negotiated, the threat is not likely to vanish. Concerns around Investor-State-Dispute-Settlement provisions in RCEP, data localisation in the context of e-Commerce etc., persist too.

Kannaiyan Subramanian of South Indian Coordination Committee of Farmers’ Movements (SICCFM) said that the current context of Indian economy as well as the agrarian crisis in the country have to be kept in mind too, when negotiating such deals. “The country is witnessing rapid deceleration in growth of the economy, businesses are shutting down or slowing down, unemployment is on the rise, and farmers’ suicides are continuing unabated. We cannot afford to have any development that has direct or indirect impacts on the rural economy in particular. Farmers are already facing severe price crashes with the government not making good on its meager price promises. In such a situation, if we reduce and also eliminate import duties on almost all product lines and subject our markets to cheaper produce from elsewhere, how are our farmers expected to survive?”.

“On the WTO front, we already are having a turbulent time. While on the face of it, there is a stalemate in WTO talks, in reality, there have been several adverse developments on this front. India’s food security programmes have come under question, on the grounds that we are breaching the accepted subsidy levels for our rice and wheat producers. Sugarcane subsidies have also come under question and we have been dragged to the dispute settlement body”, explained Rakesh Tikait, national spokesperson, Bharatiya Kisan Union (BKU). “RCEP has to be understood in this context of Indian farmers already receiving a battering in global trade agreements”.

Badagalapura Nagendra, President of Karnataka Rajya Raitha Sangha said, “It is high time that the government put out the various deals that it is negotiating in the public domain. The undemocratic and secretive processes are not acceptable to us. State governments should assert their authority in this context. We also do not buy the argument of the Union Commerce Minister that inefficiencies of our producers cannot be protected any more – what the Commerce Minister is not realising is that other producers are receiving far greater subsidies than Indian producers, and in fact, our farmers have been negatively subsidised. This was also captured in an OECD study last year very clearly. What is also important to realise that reliance on cheaper imports does not help the cause of growth in the country, and will only get us into a vicious spiral of increased unemployment and losses, with our production, and producers’ purchasing power getting affected”.

RCEP is a Free Trade Agreement being negotiated between 16 countries including 10 countries that belong to the ASEAN bloc, along with Japan, China, South Korea, Australia, New Zealand and India. If the agreement gets signed and takes effect, it would cover 47% of the world’s population, about 30% of the world’s GDP, 33% of the world’s exports, would involve 8 of the 10 busiest ports of the world, and 30% of the world’s maritime trade.meagre The deal is not just about commerce, but also about investments, and is expected to account for 32.5% of global investment flows, if sealed. RCEP’s negotiations have been underway from 2013 and 28 rounds of talks have been held so far. With 11 of the 15 partners that India is negotiating RCEP with, the country already has a trade deficit. India has opted to stay out of the deal for now, as per a joint statement issued in Bangkok by the leaders of 16 negotiating partner countries.