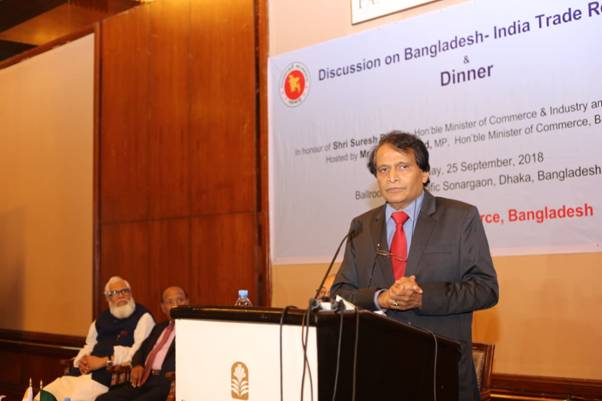 (PTI) India has proposed Bangladesh to consider negotiating a comprehensive free trade agreement with a view to promote two-way commerce and investments, an official statement said.

Commerce and Industry Minister Suresh Prabhu, who is in Dhaka, has said that after Bangladesh graduates from the Least Developed Country (LDC) status, it will no longer have duty-free and quota-free access for its products to the Indian market under South Asia Free Trade Agreement.

"In view of this, he proposed that India and Bangladesh may consider signing a Comprehensive Economic Partnership Agreement (CEPA) which would trade in goods and services and investments," the commerce ministry said.

CEPA is a free trade agreement under which two trading partners eliminate basic customs duties on maximum number of goods traded between them. Besides, both sides liberalise norms to promote trade in services and investments.

Prabhu said that the economic growth of Bangladesh is a model that could be emulated by other LDCs in the region.

He was speaking at a discussion on India-Bangladesh trade relations organised by the Bangladesh Ministry of Commerce in Dhaka yesterday.

The minister also said that the ministry is looking forward to developing a roadmap for resolving trade-related issues with Bangladesh.

He also spoke about issues related to upgradation of infrastructure at land customs stations for easing the flow of goods and people.

Prabhu added that the two countries may consider the possibility of cooperation in connecting Dhaka with rest of Bangladesh through broad gauge railway lines. The two-way trade between the countries increased to $9.3 billion in 2017-18 from $7.52 billion in the previous fiscal.