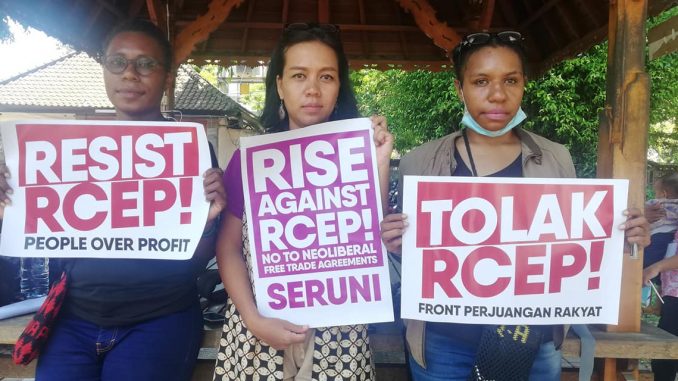 “I am Retno Dewi from women’s organization SERUNI and we stand alongside the oppressed women of the global south.

You have kept us blind, you have kept the details of this deal a secret. For that reason alone, the Regional Comprehensive Economic Partnership agreement or RCEP deserves an unequivocal rejection from women, and all the other sectors here present now.

But from the little details we know through leaked texts and the bits of information that government negotiators were willing to spare, and from our long experiences with neoliberal economic policies, we are sure that this new neoliberal free trade agreement will be detrimental to the welfare of women.

RCEP will further endanger women’s access and ownership to land and natural resources as you allow big Corporations to further monopolize larger tracts of land. Through UPOV 91, you will allow agro-TNCs to have full control of seeds meanwhile criminalizing women farmers who practice seed-saving.

RCEP will also further allow the land-grabbing of ancestral domains of our national minority.

RCEP will further deny us and our children access to social services as these become even more privatized, deregulated, and open to foreign investors.

RCEP will worsen the condition of women workers, as labor standards are eroded at the behest of foreign capitalists.

We will never accept RCEP!