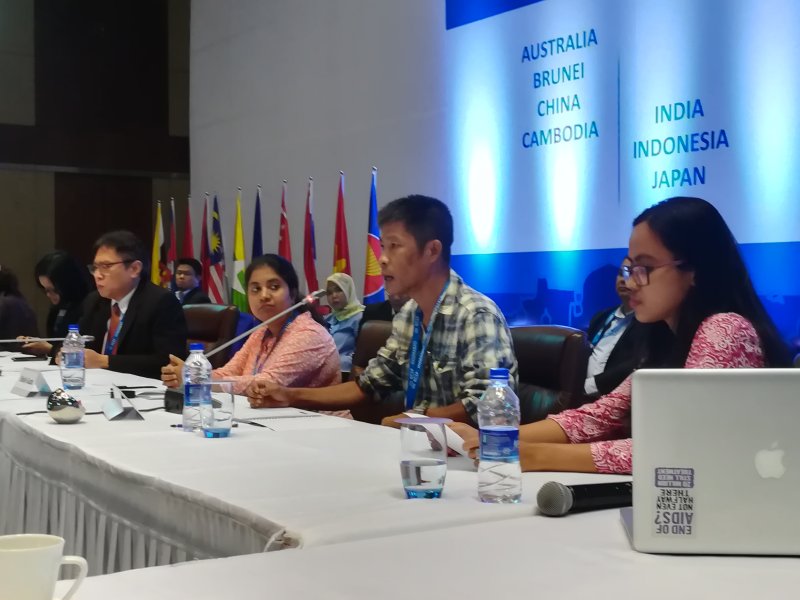 Q: Can you introduce yourself?

A: My name is Loon Gangte. I work for the International Treatment Preparedness Coalition, as a regional coordinator for South Asia. I’m also the founder of the Delhi Network of Positive People, that is a network of people living with HIV/AIDS, based in Delhi. And both these organisations we work with, we work mainly on access to treatment. We’re trying to put the medicine and the people together. And if there’s anything, a barrier in between, we take it out and have the medicines for the people, that’s what basically I am doing.

Q: In what sense is the RCEP (Regional Comprehensive Economic Partnership) is bad for medicines and access to medicines?

A: If the contentious intellectual property provision proposed by Japan go through, it will stop Indian ability to produce cheap but effective generic medicine, which will affect not just India but if you just look at the case of HIV only, more than 70 million people are relying on Indian generic medicine across the world. It’s not just HIV, but it’s hepatitis C medicine also and TB medicine and many other medicines. What Japan has proposed is more than what the WTO requires. These “TRIPS-Plus” provisions longer term protection extension of patent protection and data exclusivity, which is very dangerous. And Japan proposes an IP enforcement chapter. So companies could not only sue the government but can also sue organisations like ours if the Japanese proposals go through. These things are very technical for the layman to understand. I used to explain to my community: these bilateral trade proposals are a bomb wrapped in chocolate. If you peel and peel, you’ll see the bomb. But on the outside, it’s chocolate. So it’s very very dangerous for the country and for the citizens.

Q: You’re saying it’s quite technical, which is true. So how do you manage to mobilise people?

A: I come all the way from Delhi and my people are coming right now on the train specifically for the protest on Monday. I don’t care if you trade with my shirt, my pants, my mobile phone or my shoes, no problem - but when you try to trade my life, because if the Japan proposal goes through, it will stop the lives of many. Every morning, and evening we take our pill, for our lifelong medication. And this will be stopped and India will not be able to produce [the medication]. So we will come back to the pre-2000 era where the price was US$ 12,000 per person per year. I wouldn’t be able to afford that. Nor would my government. So it’s a direct impact on us. And it’s not about Indian nationals or being against Japan, or we are pro-India, we’ve just come here to fight for our lives. Nothing else.

Q: Do you see a link between the RCEP and other trade agreements, like the India-EU deal or the TPP?

A: They’re all the same. The architecture is the same. The architecture behind always comes in the form of a country. But the real architecture is the big pharma who are the people who puts people in power, I think. As a result, governments become the puppets of the big pharma multinationals. Be it the RCEP, or the TPP, or the EU-India free trade agreement, the text is all the same. But each time we put down one bilateral agreement, we fought the EU-India FTA for about seven eight years very fiercely in Delhi and we managed to stall it. And for the past three or four years, it’s been silent. After 13 rounds of talks the government has to make a deal, we managed to somehow do it. On the EU side also, we’ve managed to withdraw some IP clauses. But again they come back in a different form. What the EU used to do, now the Japanese and the Koreans are coming to do it again. What the US is not doing, the EU is. This way, it’s like passing the baton. Now you don’t do it, you’re the bad boy now, so give the baton to me and I’ll go to somewhere and try to do this. It’s the same shit everywhere, all these bilateral deals, in layman’s terms. It has the potential to kill the citizens, the mass, the society and it will only benefit the multinationals, nothing else about this bilateral trade.

Q: So how do you think we should move forward? How could we mobilise more people in Asia for instance?

A: This morning [at a meeting on access to medicines] we talked about how to organise a protest, about the permit, etc. For me, not giving us a permit and all these things, these are good, because I don’t fear the police, the baton, their stick or the water cannon. What I fear is losing my life and the community that I work with. If this goes through, we’ll die anyway. But if you protest, we’re just trying to defend our lives. So I’m not scared of anything in these protests. If India and other countries want to make business, fine make some business. But in the bargain, don’t kill us. This is our message. In trying to defend my life, I don’t need to take permission anywhere in this world. I will go and protest wherever they’re trying to make a decision. I’ll go and do that. All I’m trying to do is saving my life and the community. That’s how we mobilise and how we the community see it.