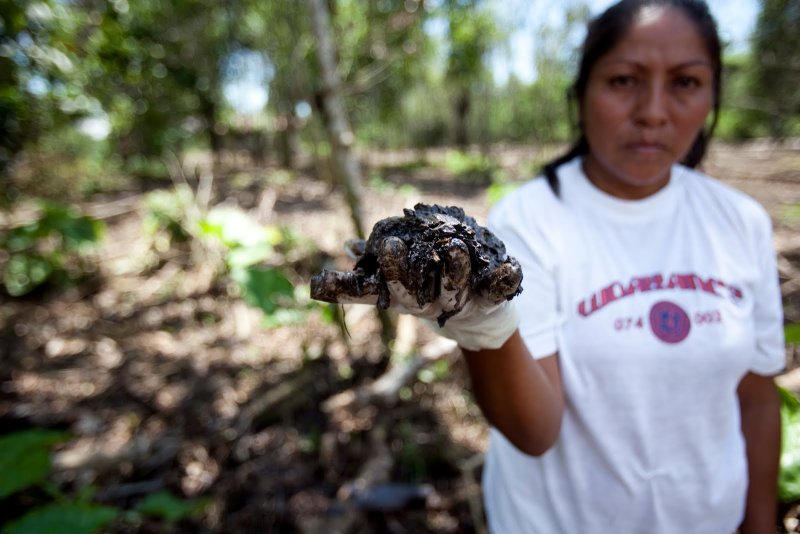 Chevron caused oil spills of over 26,000 barrels and 18,000 millions gallons of toxic water

Since the beginning of the millennium, public awareness of the costs and subjugation several countries in the region were suffering gradually emerged in Latin America. Those countries admitted recurring pressures for foreign investment as an essential resource for growth and modernization of the economy.

One of those countries was Ecuador that in the early 90’s, during the great neoliberal onslaught, had modified and established laws to ensure attractive profits to foreign companies. Additionally, Ecuador subscribed 21 bilateral investment treaties (BIT) out of a total of 30 signed treaties between 1985 and 2003.

Foreign Direct Investment (FDI) did increase during this decade, however only in the areas of natural resource exploitation. This was due to an amendment to the Hydrocarbons Law in 1994, which allowed that most of revenues from oil exports benefit foreign companies in percentages ranging from 70% to 100% profit.

Many circumstances changed by the mid-2000s. The country started implementing measures to reclaim part of the oil profits. At the same time, the first multimillion-dollar lawsuits were filed against Ecuador at international courts, as allowed by the signed treaties.

This situation, not exclusive to Ecuador, led the government and citizens to decide to audit the negotiations and how BITs were signed. Also its content and compatibility with national laws, awards and decisions issued in international arbitration processes against country, and the economic, social and environmental impact on the State and the Ecuadorian people.

The audit was officially assigned to the Commission of Integral Citizen Audit - CAITISA – additionally established in response to the Mandate of the Peoples, Nationalities and Social Organizations Assembly of Ecuador. This Assembly presented their non-conformity with the huge compensation payments to foreign companies imposed by foreign arbitration courts, as they were considered unfair and illegitimate.

II. Main findings and conclusions of the audit

1. Irregularities in the subscription of BITs and adherence to the Center for Settlement of Investment Disputes (ICSID)

Ecuador signed 30 BITs, 26 of them are still in force. Most of them were signed between 1992 and 2002. In many cases, simplified procedures were used, drastically breaking the laws. Authorities were convinced of the benevolence of foreign investment, they were therefore urged to attract it. Accession to ICSID was only formalized in 2001. However, treaties included ICSID’s intervention only as a direct, high level legal resource.

They are standardized models, which do not consider asymmetries and particular context of countries. There is scarce option for reciprocity.

Substantive clauses. These include open conditions that guarantee privileges to companies and hinder investor– State suits:

National Treatment, Most Favored Nation, Fair and equitable treatment (as “legitimate expectations of the investor”), Protection and full security, direct and indirect expropriation, Free transfer currency and legal stability, Survival (between 10 and 20 years).

The definitions are ambiguous in the interest of the plaintiff. In addition, the plaintiff and the referees (or arbitrations) have been allowed extensive interpretations beyond agreement by parties.

This practice forbids States from asking “performance requirements” (job creation, transfer of knowledge and technology, use of local inputs). Responsibilities of investors regarding the respect for human rights and environmental protection are not included.

The Washington Convention (1965), which created the ICSID, the rules the Commission of UN on International Trade Law (UNCITRAL) and BITs, allows a unidirectional or one-way process - only the investor may sue directly through international arbitration courts, ignoring the national or local ones. This implies the cessation of sovereignty of investment hosting States and the inability of domestic investors to enjoy such advantages (in clear contradiction of the “National Treaty” clause).

Conformation of arbitration courts.- In-depth research of suspicious performance of referees involved in cases against Ecuador, demonstrated unusual situations which cast doubt on the impartiality of the court |1| :

4. Arbitrators’ Lawsuits against Ecuador under BIT

The country has been sued 24 times since 2003. Multi-million suits started in 2006 when governmental measures were applied to guarantee rights and recover resources lost by the excessive benefits granted to foreign companies, but also for public, legitimate and unavoidable circumstances of a changing environment. Plaintiff are 22 firms, most of them belong to extractive industries (oil and mining); main field of operations in the Ecuadorian Amazon rainforest. Please refer to the following chart:

The BIT signed with the United States has been invoked in 17 cases; with Canada, on three occasions, and with France, Spain, Bolivia and Argentina, once each.

Seven of the claiming firms declared nationality in tax havens in countries with which Ecuador has not signed a BIT. To sue Ecuador they embrace a BIT from a different country, where effectively capital comes from.

Only five out of the 17 closed cases were favorable to the Ecuadorian State.

Amounts claimed by the plaintiff totaled around $18,000 million of US dollars. This amount includes the $9,500 million that Chevron pretends to impose its payment to the Ecuadorian State with a countersuit, which corresponds to the amount favorably granted to the native communities affected by oil exploitation. The total sum, which still lacks of other costs to be determined, is equivalent to 62% of the national budget for 2016. An amount of $ 1,300 million has already been paid by Ecuadorian State until July 2016 plus the costs of legal procedures (fees, contributions to ICSID and other costs) for around US$ 200 million. The sum of these amounts has implied depriving the Ecuadorian population of much needed schools, hospitals, universities, scholarships and housing.

5. Have BITs generated any benefit to Ecuador? None

During that period, largest investments came from Brazil and Mexico, countries with whom Ecuador doesn’t have any subscribed TBI.

Express prohibitions protected transnational corporations. Therefore, they have not complied with performance requirements: incipient employment generated by these firms, no technology transfer or use of local intermediate goods, except those low or subsidized prices.

In BIT, there is no responsibility for caused environmental liabilities.

6. Implications and impacts on social and economic development, human rights and nature of investment companies who have sued Ecuador.

Testimonies of human displacement and land expropriation where obtained. The firms subscribed fraudulent conventions and codes of conduct to subdue and to control social reactions. Depletion of natural resources, ecosystems destroyed and polluted was confirmed due to the use of unreliable, old technologies that were already outdated in other parts of the world.

In BIT there is no responsibility for environmental liabilities caused.

National courts sentenced Chevron to pay US $ 9,500 million, but the firm would not acknowledge such sentence. Instead, Chevron sued the Ecuadorian State, with threats of massive foreclosures, payment of US $ 112 million, with no concern at all for the emergency situation Ecuador was going through due to the 7.8 (Richter scale) earthquake, which stroke on April 16th, 2016.

Persistent tax evasion of almost all companies. Among diverse forms of fiscal evasion (including those that allow ‘tax havens’), the Commission highlighted a systematic practice of thin capitalization: capital registered as debt, not as an investment as well as the establishment of not transparent subsidiaries. In this way, many businesses have registered most of their capitals as debts (many within the firms), with a minimum investment. An evidence of this practice is the drastic growth of private foreign debt by the mid 90s. This is when foreign firms had liberty and aperture to exploit oil in the country.

According to the actual Ecuadorian Constitution in force since 2008, it is prohibited to yield sovereign jurisdiction to international arbitration…(art. 422). Therefore, the Ecuadorian government has taken initiatives and made decisions related to the BIT and Investor-State controversies:

Complaint filed against ICSID on July, 2009. It only produced effect six months later. However the lawsuits in ICSID continue.

Rejection of all 26 BITs in force until 2008. Internal and external procedures are ongoing.

Presented to the UN an initiative for a binding code for transnational firms on human rights.

The current investment protection system has been increasingly questioned by most countries (states and social movements), while it becomes untenable, as UNCTAD and other multilateral agencies acknowledge this situation. It is then appropriate to promote new guidelines, which derive from the Ecuadorian experiences found in the audit, since there are similarities in substantive terms and other conditions of bilateral investment treaties and trade agreements known as: TPP, TTRP, CETA.

Responsibilities of investors: Investments committed to be transparent, sustainable, and consistent with the host country development; awareness of the risk of any investment. States cannot guarantee profits; respect and compliance with tax, currency, labor and environmental obligations; transparency, legality and legitimacy in capital movements.

Rights and responsibilities of host countries: Qualify and evaluate each case of FDI in the country; the sovereignty of the respective state to enact policies and decisions of public interest and development prospects and to care for the survival of domestic investments (forms of equity partnership, joint management levels). In turn States must protect FDI committed to national sustainable development.

Alternative model investment agreement: Objectives should safeguard the hierarchy of human and environmental rights over commercial interests; prohibit retroactivity; universal definitions of consensus, according to international standards. Clauses to avoid “indirect expropriation” or “equivalent to expropriation”, “national treatment”, “most favored nation”. Accuracy of “intangible assets”, particularly intellectual property rights; also define those services that can be included and those that cannot.