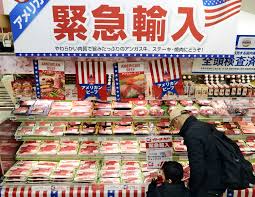 Investment will overshadow trade in Japan-U.S. talks By Riley Walters

The Japan-U.S. Trade Agreement (JUSTA), the pinnacle for modern trade policy between the two allies, is now in force.

While it’s not a comprehensive trade deal, the JUSTA will remove barriers for billions worth of traded agricultural and industrial goods. Leaders in Washington and Tokyo can rightly highlight the “win-win” benefits of the agreement. And so, over the coming year we should expect other economic issues besides trade to take the lead for future policy discussions and coordination.

Japan-U.S. trade policy will instead take a back seat in the next 10 months to issues like investment policy. Meanwhile, all eyes will be on Washington as the presidential debates and election take the spotlight. Washington will become a political and rhetorical minefield. Any substantive discussion on trade policy will be out of the question as trade continues to become a highly politicized issue. But Japan-U.S. policy coordination will still continue on a working level.

It’s good the JUSTA is essentially done with (though there are implementing procedures to go through) and negotiations are out of the way. But the election is only one reason why we shouldn’t expect any substantial progress on a comprehensive Japan-U.S. free trade agreement (FTA) in the near future.

It’s almost impossible for Congress to pass a trade deal in an election year. Even though the White House may get Congress to vote on the U.S.-Canada-Mexico Agreement, this leaves little political capital left to take up a Japan-U.S. FTA.

U.S. and Japanese trade negotiators understand these political limitations, despite their efforts to negotiate an FTA. Still, even if it wasn’t an election year, both governments are perfectly fine taking the JUSTA as it is to avoid removing barriers to traditionally protected industries or risking punitive tariffs.

There are still a number of areas where Japan-U.S. trade can become more free. The JUSTA falls short of addressing import taxes and other trade barriers on certain goods such as rice, butter, fresh poultry, grapefruits, mandarins, melons, tomatoes, strawberries and passenger vehicles, to name a few.

That’s not to say Japan-U.S. trade interests won’t completely fall by the wayside this year. Both the United States and Japan still have a keen interest in figuring out how to address trade distortions caused by large economies like China. Dealing with non-market economies through the framework of the World Trade Organization will be a top priority for the U.S., Japan and the European Union at this year’s ministerial conference in June — though they’re unlikely to reach any significant solution.

U.S. representatives are more likely to attract criticism from other WTO members than support after allowing a key feature of the WTO’s dispute system, its appellate body, to fall into limbo last year. So with trade essentially out of the way, this more or less moves investment policy into the front seat for Japan-U.S. bilateral discussions.

Investment is important on its own, given its intersection with trade and when talking about Japan-U.S. investments.

U.S. entities are the largest investor in Japan, having historically invested over $60 billion, according to the Japan External Trade Organization. Japanese entities are the second-largest investor in the U.S., having historically invested over $500 billion in U.S. industry and finance, according to the U.S. Bureau of Economic Analysis.

Much of these new rules focus on administrative concerns, like company ownership, and the legal authority governments have to review foreign investments. Other new rules focus on whether potential bad actors could get access to critical technology and information in industries sensitive to national security, with both countries having an eye toward investments from China. But as the U.S. has seen in the past, investments from our largest partners (the United Kingdom, Japan and Canada) tend to get caught up in this red tape for review just as frequently as investments from China. The same could happen for Japan and its occasional investors.

Meanwhile, China has a new foreign investment law that went into force this year that stipulates foreign investment will be treated as equally as domestic investment. Overbearing Chinese regulations on U.S. investments are one of the issues disputed in the U.S.-China trade war.

This isn’t to say U.S. and Japanese officials haven’t been communicating on these new rules at all. For the U.S., it’s the most comprehensive reform of this type of foreign investment law since 2008. Officials want to make sure they get the right mix of input from stakeholders because the last thing they want is to stifle foreign investment.

For Japanese officials, and more importantly Japanese companies, it’s also about making sure that when the U.S. establishes a new whitelist of “excepted foreign states,” where a few countries will see some relief from these new rules, Japan manages to get on the list. But that decision may not be made for another two years.

Other types of investments in Asia are as likely to be in focus this year as well. Just a few months ago, the U.S., Japan and Australia introduced what’s called the Blue Dot Network, an effort that piggybacks on previous investment agreements backed by Japan, the U.S. and Australia to make sure development projects in the Indo-Pacific are high-quality.

Chinese investments abroad, either as a part of its “Belt and Road” initiative or in technologies related to the Made in China 2025 plan, will continue to be the focus for U.S. and Japanese efforts in 2020, too.

Trade will re-emerge as a leading issue in the U.S. as Congress takes up the renewal of America’s leading trade law in 2021. Until then, expect investment to lead the policy discussion and coordination for U.S. and Japanese officials.