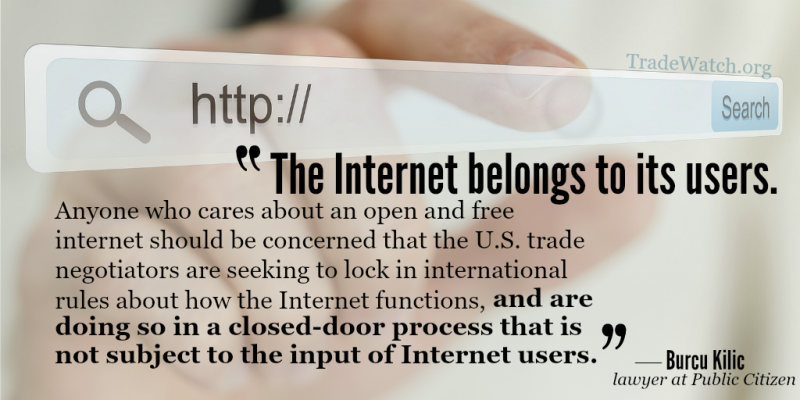 It doesn’t matter who does the lobbying: Trade agreements aren’t the place for internet regulations

The Associated Whistleblowing Press released portions of draft text proposed by the United States for the Trade in Services Agreement (TISA) this week, revealing some alarming provisions that indicate how tech companies have been involved in influencing a secret international deal. The language of the leaked treaty shows provisions that could impact privacy online, and net neutrality—with no public consultation or opportunities for open debate. What is dispiriting is some of the language of these Internet regulations almost certainly comes from tech companies, who have joined the many other lobbyists fighting for their special interests behind closed doors.

TISA is yet another so-called trade deal which began negotiations in 2013 and is being hammered out in back room meetings between 23 countries around the world, including the United States, the European Union, Canada, Japan, South Korea, Colombia, Mexico, and Peru. According to the leaked documents, countries involved in the negotiations have agreed to keep the text of this agreement classified for five years after it enters into force. On top of the five-year-embargo, neither the negotiation rounds nor the topics discussed in this agreement have ever been made public.

Banning Limits on the "Free Flow of Information"

TISA contains a provision that bans countries from regulating how and when any given company can move, access, and process the data for its services:

Article X.4: Movement of Information No Party may prevent a service supplier of another Party from transferring, accessing, processing or storing information, including personal information, within or outside the Party’s territory, where such activity is carried out in connection with the conduct of the service supplier’s business.

This particular language seems to be aimed at subverting data localization laws. In some cases, this could be a good thing. Governments that might want to enact national censorship filters could, theoretically, be challenged under such provisions. The "free flow of information" is the term government officials and certain tech giants use to refer to these sorts of rules, and they often place emphasis on their potential to protect free expression and access to information on the Internet.

But that benefit could come at the cost of consumer protections for personal data. For instance, TISA could directly threaten EU’s privacy regulations, which require companies to store EU citizens’ personal data locally to ensure that those companies follow the EU’s strict legal requirements for handling citizens’ data. Similar laws exist in Colombia and Mexico, and in Paraguay, which is also a party to TISA, civil society groups are now campaigning for such laws.

The companies with the most to lose from stronger privacy regulation are those multi-nationals whose revenue revolves around the trading and sharing of personal data: in other words, tech companies like Facebook, Google, and Internet advertising networks. Language like this is intended to make their lives easier: but they also have a profound effect on how Internet users rights are protected.

So in short, this "free flow of information" debate is complicated, and is exactly why policies like these should not be written in secret. Negotiators should be working to reconcile this tension between powerful private and public actors who may have conflicting stances on major human rights issues such as privacy and free expression. That in turn, will require open public participation from a variety of stakeholders. By contrast, TISA’s language reflects the concerns of the Internet industry, and not necessarily the interests of Internet users as a whole.

The provisions on "Open Networks, Network Access and Use" may look positive at first, but it contains ominously vague language that threatens net neutrality:

Article X.5: Open Networks, Network Access and Use Each Party recognizes that consumers in its territory, subject to applicable laws, and regulations, should be able to:

(a) access and use services and applications of their choice available on the Internet, subject to reasonable network management;

What is "reasonable network management"? We can’t know because it’s not defined anywhere else in this leaked text. Leaving such language undefined invites opponents of net neutrality to expand it as a justification for practices that undermine the open Internet. It’s crucial that the scope of such terms are appropriately defined so it cannot be used to authorize application discrimination. In a secret trade agreement, such details will be hammered out by opposing corporate lobbyists, with little consideration of the broader public interest.

Tech Policy Should Not Be Decided in Secret. Ever.

For over a decade, EFF and other digital rights organizations have denounced content industry players for seeking to impose draconian copyright policies via secret international deals, like ACTA and the TPP. But they are not the only industries lobbying for their interests in these deals. Increasingly, Internet companies are joining this secret horse-trading.

No matter which industries are involved and no matter how well-meaning or informed the parties might be about the issue at hand, Internet policy and other digital regulations can never be entrusted to a few entrenched interests. These policies have implications for human rights, and we can’t let special interests decide them for us in secret.