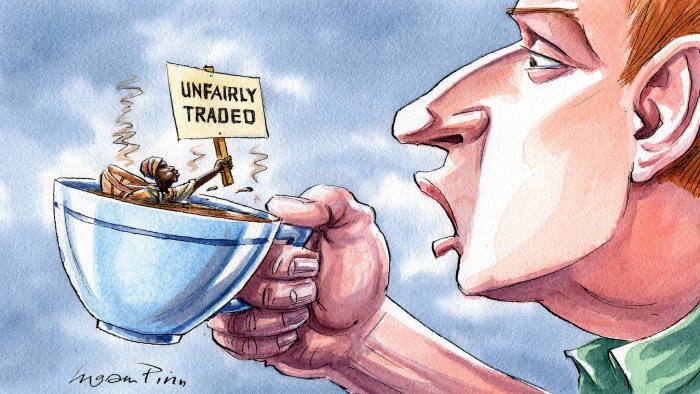 It is not trade, it is imperialism: why Kenya must reject the US Free Trade Agreement

Earlier in 2020, Kenya’s President Uhuru Kenyatta met with US President Donald Trump in Washington to “negotiate” a “free”-trade agreement.

Notably, this will be America’s first such deal with a Sub-Saharan country. This deal will precede the expiry of the African Growth Opportunity Act (AGOA) in 2025. We have four more years – why the hurry? Let us build a consensus within our African trading blocks.

This planned agreement is a breach of regional and continental trade protocols. East African partner states were planning on giving up their national AGOA strategies and shifting to a collective regional one. This would have necessitated fresh negotiations with the US aimed at securing better trade agreements with the East African region. Kenya seems to have bailed out and opted to go it alone.

Recent evidence by the United Nations Economic Commission for Africa, shows that when African countries trade with themselves they exchange more manufactured and processed goods, have more knowledge transfer, and create more value. In fact, manufactured goods make up a much higher proportion of regional exports than those leaving the continent—41.9 compared to 14.8 percent in 2014.

EAC Trade officials have expressed concerns that this deal is in breach of Section 37 of the East African Community Customs Union Protocol that requires a member state to inform other partners of its intentions before such a deal is signed.

A petition was filed at the regional court by Christopher Ayieko & Emily Osiemo challenging the proposed Free Trade Agreement, which is a violation of the East African Community (EAC) Treaty and its protocols.

A Free Trade agreement with the USA will be lopsided and will threaten cottage industries in the country as well as informal jobs known as Jua Kali. This will negatively impact the lives of millions of working class Kenyans dependent on what is referred to as the “informal sector”.

Our markets will be swamped into oblivion by highly subsidized American goods. Agriculture and small scale manufacturing will also take a hit. In agriculture, for example, America wants to secure a market for their produce in Kenya.

This will threaten our food security and the preservation of indigenous crops as local farmers’ ability to produce will be limited by vicious competition from highly subsidised agricultural products from the US. Our food sovereignty will be endangered by the so called “Plant Variety Protection” law that will exert pressure on the government to coerce smallholder farmers to use seeds that can’t reproduce after their first growth thus putting farmers in a loop where they’ll have to buy these Genetically Modified Seeds year after year.

It is highly likely that more harmful pesticides from America will also make their way into the country. According to Route to Food Initiative (RTFI), At least 32 percent of pesticide active ingredients that are currently registered and being sold in Kenya, have been withdrawn from the European market and U.S. markets, due to their serious potential impact on human and environmental health. They include Amistar, Abound, Heritage, Olympus, Ortiva, Priori Xtra and Quadris. (Is it possible to mention a few which are already in use here?)

August 2020, an American Dairy lobby group urged the U.S. Trade Representative Robert Lighthizer to “stay the course” in negotiating a free trade agreement with Kenya. It argued that a deal with Kenya will help its members fight protectionist measures in the country and combat the European Union’s market dominance.

In the Aug 5th 2020 letter, the group said: “An FTA with Kenya is all the more important to U.S. dairy exports’ global competitiveness when considered in view of two primary factors: 1) Kenya’s protectionist measures over its dairy sector, and 2) the market access advantages enjoyed by the European Union,” “With no other full and comprehensive free trade agreement (FTA) in place in sub-Saharan Africa, the U.S.-Kenya negotiations have the potential to provide tangible market access for U.S. agricultural exporters to a growing economy while also leveling the competitive playing field for dairy exports to Kenya and beyond.”

This will further disenfranchise dairy farmers in Kenya already choking under the dominance of the Kenyatta family dairy industry monopoly. It’ll be interesting to see how this plays out. Will Kenyatta allow the US to destroy his dairy empire for other concessions?

This FTA will crowd out our domestic Industries. Kenya is classified as an emerging market and relies heavily on subsistence farming for employment. We’ve witnessed what the insatiable taste for avocados by young American hippies has done to the environment in countries involved in Agribusiness with the U.S. The same awful fate might befall our farmers.

How are small, family/community farms going to compete with heavily subsidized agri-businesses from America? Many Kenyans will lose their livelihoods and as a result, we are likely to witness massive rural-urban migrations which will exacerbate overcrowding and crime in our towns and cities.

American companies will probably outsource ‘human resources’ from here and will take advantage of our weak labour laws to exploit the most vulnerable who will slave away in their factories.

Kenya has weak environmental laws and this will likely allow American companies to go on a rampage. We might witness deforestation, pollution, poaching (disguised as “profitable sport hunting”) and overall degradation of our natural resources.

According to documents reviewed by The New York Times, “An industry lobby group representing the world’s largest chemical makers and fossil fuel companies wants Kenya to reverse its strict limits on plastics — including a tough plastic-bag ban. It is also pressing for Kenya to continue importing foreign plastic garbage, a practice it has pledged to limit.”

American companies might encroach on even the most remote corners of our country that have remained resilient against overt capitalist influence. The U.S. will likely gentrify these sacred lands and degrade indigenous cultures.

The U.S. has a brutal history of uprooting the indigenous people from their lands and some of our people might be the next victims of U.S. occupation. They will likely be displaced and suffer disease and death as their resources are plundered.

Over a century ago, in the Communist Manifesto, Karl Marx and Friedrich Engels pointed out to the ability of the capitalist ruling class to use the cheap prices of commodities they produce with their developed technology as “the heavy artillery with which it batters down all Chinese walls” to penetrate any nation.

Under the capitalist system, and especially now during the capitalist crisis we’re currently experiencing amid COVID-19, this FTA will destroy livelihoods in both the imperialist and the oppressed countries. It will drive workers to desolation while a handful of people grow obscenely rich.

The U.S. has been pursuing an “America First policy” in its trade dealings with other countries as part of its attempt to counter China’s rise as a global power.

U.S. hegemony is under threat and an FTA with Kenya will solidify their foothold in the region and hopefully, for them, lead to other less patriotic African governments to follow suit. This agreement puts two strikingly unequal countries on a path of exploitative “trade”. We absolutely must not allow this.

We must reject imperialism veiled as “Free trade agreement”. Why would our (mis)leaders be naive to believe this will be of any benefit to us? But they’ve demonstrated many times before that their individual needs come first before the interests of millions of poor Kenyans.

We should ally with our African fraternal states as we are all fighting the same exploiter – we need to build strength in our unity so that we can be more self-reliant.