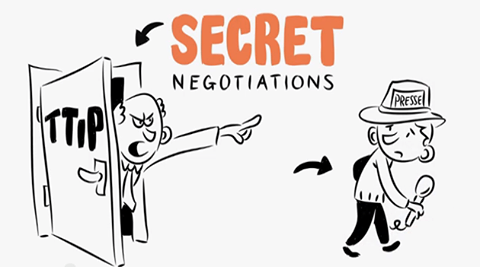 Rome (dpa) — Italy said on Monday it would push for the publication of confidential papers on controversial free trade negotiations between the European Union and the United States, in a bid to increase transparency.

Critics have complained that talks on the so-called Transatlantic Trade and Investment Partnership (TTIP) are shrouded in secrecy, and have argued that the pact will favour big business at the expense of ordinary consumers.

Italy‘s Vice Minister for Economic Development, Carlo Calenda, said the document laying out the negotiating position of the EU‘s executive arm, the European Commission, should be declassified.

He was speaking as the current president of the committee of EU trade ministers, which still has to approve his proposal.

Calenda said he wrote a letter to EU colleagues, co-signed by EU Trade Commissioner Karel De Gucht, urging them to back his idea. He said it was necessary to improve "public awareness and perception of the aims of free trade talks with the US."

He added that the Italian presidency of the EU would also "try to improve communication about the contents of the TTIP, in order to periodically inform the European people about how negotiations are proceeding."

Supporters of the TTIP say it will create the biggest free trade area in the world, giving a much-needed spur to growth and jobs on both sides of the Atlantic.

Six rounds of negotiations have taken place since July 2013, but progress has been slow.