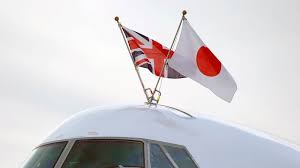 TOKYO (Reuters) - Japanese Foreign Minister Toshimitsu Motegi will visit Britain this week for what he said will be difficult talks with British Trade Minister Liz Truss, with the hope of finding middle ground and concluding a post-Brexit trade deal.

“It is indispensable to swiftly form a framework for trade and investment between Japan and Britain that will replace the Japan-EU EPA to ensure the smooth continuation of bilateral businesses,” Motegi told reporters on Tuesday, referring to an economic partnership agreement with the EU.

The two countries hope to clinch a deal before Britain’s transition out of the European Union concludes at the year end, to avoid any gaps in bilateral trade arrangements.

Motegi’s Aug. 5-7 visit to Britain will be the first overseas trip for any Japanese government minister since the global spread of the novel coronavirus, he said.

“Difficult negotiations such as this, where national interest is at stake, cannot be conducted over the telephone,” he told a regular news conference.

“We will negotiate face-to-face. I’m afraid negotiations will last many hours, but I would like to find middle ground and reach an agreement.”

Motegi, asked about the Hong Kong government’s postponement of a city legislative election, said he had “grave concerns” about the issue.

“It is important for Hong Kong to develop in a democratic and stable manner, while its free and open structure is maintained under the ‘one country, two systems’ principle. That’s Japan’s consistent stance,” he said.

“Holding a free and fair election without delay is an important basis for that. Japan would like to keep an eye on the situation surrounding the Hong Kong legislature election while cooperating closely with other countries concerned.”

Hong Kong leader Carrie Lam on Friday postponed the Sept. 6 election to the Chinese-ruled city’s legislature by a year, citing the public health risk from the novel coronavirus.

The pro-democracy opposition in the former British colony had been hoping to win a historic majority in the legislature.