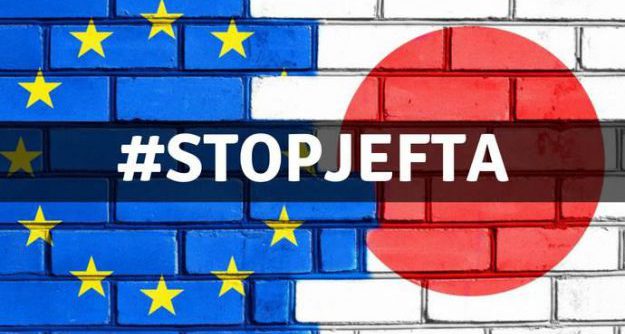 JEFTA: a danger for the future

The European Union-Japan Free Trade Agreement, JEFTA, is due to be submitted to the European Parliament for ratification in the week of 10 December. After negotiating JEFTA in complete opacity, the European Commission and the Member States under the influence of neoliberals and business lobbies forced this ratification vote to be held before the European elections (it should be recalled that the CETA [1] had been rejected by 40% of MEPs and that it is far from certain that the future Parliament will ratify this type of treaty).

For Europe, JEFTA should only be ratified at the European level and not at the level of the individual Member States, as the ISDS arbitration tribunal that would have given it mixed jurisdiction was removed from the text, with Japan’s agreement, just before it was signed.

The "progress" compared to CETA lies only in the name of its organ, which is less hypocritical than that of CETA (a simple "forum"). Similar to AETE, JEFTA’s regulatory cooperation body, which is in charge of its agenda, is headed by senior officials appointed by the European Commission and Japan, without any significant barrier to conflict of interest. Lobbying by transnational corporations and their organizations is duly recognized and instituted and elected officials are excluded. Regulatory cooperation will thus be able to prepare and almost "make the law" in a binding way, upstream of any principle of democracy.

In accordance with its nature as a free trade agreement, JEFTA’s purpose is to remove all barriers to trade and investment, the only truly binding values in the text of this treaty. Like any neoliberal text worthy of the name, which must obtain the agreement of elected representatives and/or citizens, considerations in line with other values are certainly advanced in the form of fine declarations of principle; but the analysis of the text of the treaty inevitably leads to the conclusion that their presence has no other function than that of decoys.

An example? Unlike CETA, the JEFTA text refers to the Paris Agreement (Chapter 16). A progress that would take into account the criticisms made for CETA? Not really: If we look in detail, Article 16.4.5 states that:"Nothing in this Agreement shall prevent a Party[EU or Member State, Japan] from adopting or maintaining measures implementing multilateral environmental agreements[for example, the Paris Agreement] to which it is a Party by ensuring that such measures are not implemented in a manner that would constitute a means of arbitrary or unjustifiable discrimination against the other Party[Japan, EU or Member State] or a disguised restriction to trade. In fine, the Paris Agreement is under the control of JEFTA’s terms!

Another example is labour law and more generally social rights. The same reason (to prevent any impediment to trade and investment), the same procedure (state commitments are reaffirmed in any case, in this case the ILO), the same punishment (to bring under their control the application of ILO standards). It should be noted that Japan has not ratified two of the eight core ILO conventions (the Abolition of Forced Labour and Discrimination (Employment and Occupation)), which would mean that its two conventions would no longer be applicable under JEFTA. This non-ratification of its two conventions by Japan illustrates the level of consideration of labour rights in Japan and therefore augurs well for its future propensity to consider labour rights in the EU as obstacles to trade and investment in the context of JEFTA implementation. Zenroren and the CGT require that ILO Conventions 105 and 111 be ratified by Japan.

With regard to the precautionary principle, JEFTA does not doubt that this absence will, for example, be detrimental to Japan’s inability to challenge the GMO Directive, via, among other things, the Regulatory Cooperation Council, given that Japan is precisely the country that allows the most in production and food.

As a result of this strengthening of intellectual property law to which the Parties formally commit themselves, revelations such as that of the "Dieselgate", and therefore the subsequent corrective measures to address public concerns, are seriously compromised: JEFTA will make it impossible for regulators to obtain access from industry or banks to their computer equipment and software to conduct compliance audits with national laws, particularly those relating to health, the environment and financial services. In this same part the actions of the whistleblowers will be impossible.

For the rest, it is the most uncomplicated liberalization, particularly for e-commerce and financial services, without leaving much scope for more localized policies and not without impact in all areas (employment, for example), a little as if Japan and the European Union were the same territory administered by uncontrolled committees, except for that of lobbies. In addition, the protection of personal data is insufficiently guaranteed.

In the face of this treaty, which is practically established, in Europe as in Japan [2], in hiding, the consequences of which could be disastrous from the social, health and ecological points of view, for European workers as well as for Japanese workers.

The CGT, the French Trade Union Confederation and ZENROREN the Japanese Trade Union are calling on MEPs not to ratify JEFTA and to demand transparent negotiations in which workers’ unions have their say.

[2] The Japanese government has indicated that it plans to have only a few days of discussion in the lower house committee for more than 570 pages of JEFTA Japanese text, and it will do the same for the upper house committee. This shows how undemocratic JEFTA is in Japan too.