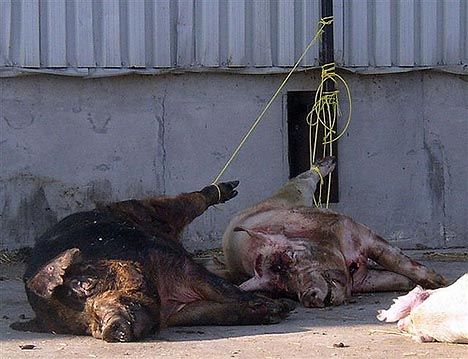 Keep the farm TTIP- and CETA-free!

Since 2013, the European Union has been negotiating a free trade and investment treaty with the United States (Transatlantic Trade and Investment Partnership or TTIP). In the spring of 2016 the finally negotiated text of a similar treaty between the EU and Canada was presented: CETA (Comprehensive Economic and Trade Agreement). The European Parliament will vote on CETA in the spring of 2017 after which it will need to be ratified by all individual European States.

In both treaties food, agriculture, animal husbandry and horticulture play a major role. In this document a coalition of seven farming organisations, Bionext, Friends of the Earth Netherlands, FNV Arable Green, Transnational Institute and Platform Earth Farmer Consumer, list the consequences of these treaties for the agricultural sector. Who are the potential ‘winners’ and ‘losers’?

The future structure of the TTIP treaty remains largely unknown, but the prospects for European farmers and consumers are not good. There are two reasons for this. Firstly, TTIP negotiators are discussing abolishing or lowering import tariffs for agricultural products. Secondly, the mutual recognition of each others’ standards relating to environment, animal welfare, food safety and labour rights is on the agenda.

In both cases there are negative implications for European farmers and consumers. The EU has set high tariffs for agricultural products. This is because they protect farmers against unfair competition from countries that have lower standards and can therefore produce goods less expensively. The U.S. has lower standards than the EU. If TTIP is given the go-ahead, the European market will be flooded with cheap, low standard American products resulting in unfair competition, thereby undermining the position of farmers and workers. It will also have a negative effect on food safety, the environment and animal welfare.

Currently, the cost price of American meat and eggs is 40% lower than in The Netherlands. This disparity is due to more stringent European environmental- and animal welfare standards. Moreover, American fodder and land prices are much lower than those in Western Europe, and American workers are faced with far lower job security. It remains a point of concern that the U.S. has signed only two of the eight fundamental conventions with regard to labour as drawn up by the International Labour Organization (ILO).

The first version of our report was published in April 2016. In July 2016 a second revised edition was issued which included the most important results of a research undertaken by The Council of Canadians (and diverse European NGOs) about the consequences of CETA for agriculture and food safety. This current document is an English translation of that report that has been updated with the latest information.

The first chapter of this report gives a general outline of TTIP and CETA. It explains why especially the European agriculture, animal husbandry and food supply are under threat. Chapter 2 clarifies the difference in standards between the EU, the U.S. and Canada. Chapter 3 gives examples of European legislation currently being altered due to pressure of these treaties and a number of reasons why standards now and in the future are under threat. Chapter 4 gives a survey of the most important agreements within CETA while Chapter 5 lists the expected consequences of TTIP per sector. The report concludes with a summary of the most important objections to the agreements.