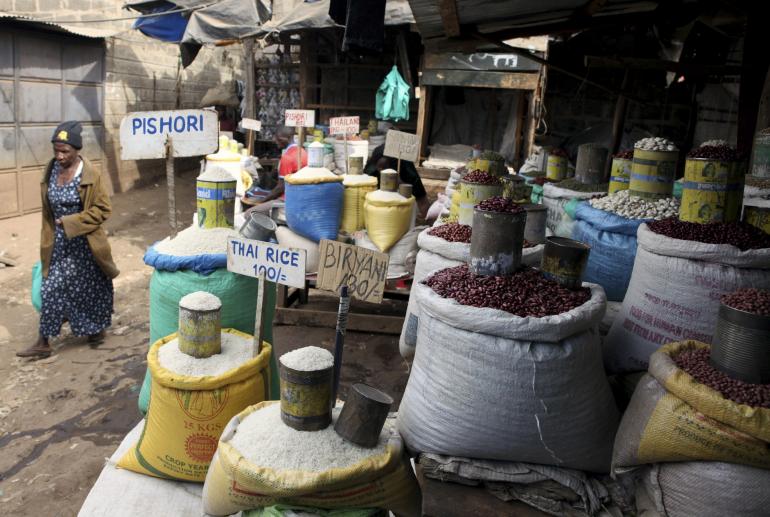 A woman walks past a grain shop at a market in the Kibera neighborhood of the Kenyan capital Nairobi. Reuters/Noor Khamis

In Kenya, fast economic development has become a double-edged sword. Tentative plans to sign an Economic Partnership Agreement, or EPA, with the European Union could bolster some of the country’s vital sectors, but it could also distance Kenya from its neighbors in the East African Community, or EAC.

In the context of East Africa, Kenya is an economic powerhouse. It boasts a GDP of $34 billion, and the World Bank projects 5.7 percent economic growth for 2013. That makes Kenya a "developing country," according to U.N. classifications, while its EAC neighbors — Uganda, Burundi, Tanzania and Rwanda — are categorized as "least developed countries." According to EU policy, least developed countries can export anything but weapons to the European markets, without burdensome quotas or tariffs.

For now, every EAC country is covered under an interim trade deal signed with the EU in 2007. That agreement was meant to buy time so that all five states could eventually sign EPAs with the EU, but negotiations on that front have been slow. Frustrated EU officials are now threatening to terminate the interim deal as soon as January 2014. Should that occur, Uganda, Rwanda, Burundi and Tanzania would still have easy access due to their least developed status. Kenya’s higher level of development excludes it from this safety net — its exports could be saddled by tariffs of up to 16 percent. Thus, signing an EPA could be the only way for Kenya to maintain access to EU markets.

EU trade composed 9.5 percent of Kenya’s imports and 14.9 percent of its exports last year, according to EU data. Most of those exports came from the horticultural industry, which is why Kenya’s flower, fruit and vegetable producers are lobbying for an EPA agreement before time runs out on the interim trade deal.

“The lengthy nature of the talks is causing a lot of anxiety among businesses which need to plan,” Jane Ngige, the chief executive of the Kenya Flower Council, said to the Kenyan news outlet Business Daily Africa. “The inconclusive talks leave many gray areas in terms of what the future holds.”

But critics of an EPA argue that Kenya should not rush into a deal with the EU when it has less competitive trading partners in its own backyard. They note that intra-continental trade — which is sorely lacking all across Africa — should have priority over strengthening ties with Europe, and that Kenya should only enter into an EPA if it does so jointly with the entire EAC bloc.

“Signing of the EPAs should be sequenced on the regional integration to avoid disrupting trade,” said Prof Yash Tandon, a trade advisor to the EAC, according to Kenya’s Daily Nation. But Uganda, Burundi, Tanzania and Rwanda have no pressing reason to enter into an agreement with the EU anytime soon. Kenya is caught in the middle as it tries to chart its way forward — either with its regional partners or without them.