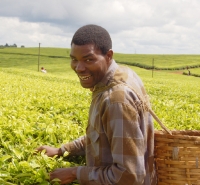 NAIROBI, Sep 23 (IPS) — Tea used to be Kenya’s major cash crop earner but ever since the world’s largest consumer of tea, Pakistan, entered into a free trade agreement with seven of its Asian neighbours, the local tea industry has been haemorrhaging.

Five years ago this agriculturally endowed east African country of 35 million people boasted exporting 85 percent of the tea consumed in Pakistan. Today, with the increased competition, this percentage has fallen to 65.

The Kenyan tea industry may wish to recall that seven years ago Pakistan’s embassy in Nairobi sought to establish a free trade area (FTA) with Kenya, east Africa’s premier economy, a proposal that has been on hold ever since.

Kenya has rebuffed the overtures of Pakistan for an FTA so far because such an arrangement would conflict with the taxation regimes of the Common Market for East and Southern Africa (COMESA), including the East African Community (EAC) trading bloc, of which Kenya is a member.

‘‘Our request for an FTA with Kenya is still pending. Kenya should see the sense in this proposal,’’ says Dr. Amjad Iqbal, the commercial counsellor at the Pakistan embassy.

‘‘We remain sanguine that Kenya will come round to seeing the logic of why the FTA would be of immense benefit to both countries. It’s true that for the past three years Kenya’s tea exports to Pakistan have shown a trend of decline.

‘‘But this is as a result of myriad reasons, key being that Kenya’s teas are relatively more expensive today compared to the competition.’’

Official statistics drawn from the Tea Board of Kenya (TBK), the statutory regulator of the tea industry, indicates that earnings and volumes of exported tea to Pakistan have been plummeting.

According to Sicily Kariuki, TBK managing director, Pakistan has been overtaken by Egypt and the UK in the first two quarters of this year. ‘‘Egypt is currently the leading export destination with 43 million kg, followed by Britain with 32 million kg, and Pakistan logs in third with 27 million kg.’’

In other words, tea exports to Pakistan have dipped by 43 percent in the first half of this year.

But the tea sector mandarin remains confident that it’s only a matter of time before the sector bounces back, despite the gloomy statistics currently being spewed out.

‘‘Pakistan buys in bulk and when prices started going up, they held back, waiting for them to improve. We expect them (Pakistan) to start buying when their supplies begin to go down even at current prices,’’ she says.

However, close watchers of the local tea industry invariably point out that the slump in tea exports to Pakistan was noticed after a signing of a regional Asian FTA in January 2004.

The FTA was entered into by Bangladesh, Bhutan, India, Maldives, Nepal, Pakistan and Sri Lanka.

Becoming enforceable on January 1, 2006 the South Asian Free Trade Area (SAFTA) brings together a group of countries that agree to eliminate tariffs, quotas and preferences on most if not all goods traded among themselves.

To underline the seriousness of the SAFTA, Pakistan and Sri Lanka have since okayed preferential market access to each others’ exports through tariff concessions. Today Sri Lanka enjoys duty-free market access for 206 products in the Pakistan market. Conspicuously, tea is high on the list.

Statistics from the Sri Lanka commerce department indicate that, since signing of the FTA, tea exports to Pakistan had burgeoned. As of 2006, one year after the signing, tea shipments to Pakistan had grown by 13 percent, earning Sri Lanka eight million dollars.

Compounding the situation from the Kenyan viewpoint is Pakistan’s roving eye. According to Iqbal, Pakistan is holding exploratory talks with Malawi and Rwanda which may lead these African tea-growing states to grant Pakistan FTA status.

Iqbal says that teas from both countries have shown remarkable improvements in the quintessential areas of quantity and quality, emboldening the belief that Kenya’s tea industry may be heading towards an intractable funk.

Illustratively, tea exports from Rwanda to Pakistan today account for about eight percent of that country’s total import market share, compared to six percent three years ago. Malawi today chalks an impressive seven percent of the pie, compared to five percent in 2005.

In total, tea raked in a whopping 43 billion shillings (666 million dollars) for Kenya last year (2007). It was the country’s third highest earner of foreign exchange for the second year running.

In 2007 Kenya produced 369 million kg of tea. A drop is expected since TBK projects 336 million kg for this year as a result of post-election violence witnessed early in the year and dry and frosty weather experienced in parts of the country.

What could create more jitters for Kenya is the November 2006 FTA between Pakistan and China, the world’s fastest growing economy. This is a trade pact that has the potential of eclipsing Kenya’s premier tea export position in Pakistan.

An international survey by the Intergovernmental Group on Tea (IGT) issued a scary warning to black tea exporting nations such as Kenya. The IGT, which operates under the aegis of the Food and Agriculture Organisation, indicated at its biannual meeting in May this year that imports of black tea by non-producing nations had almost stagnated.

This means exporting countries must open up new fronts within their domestic markets to stay afloat.

‘‘To jumpstart tea value addition, we want the creation of a tea export promotion board to develop tea products for export by borrowing from the Sri Lanka and Dubai models on incentives," says Stephen Imanyara, the agency’s chairperson.

He adds that poor infrastructure, expensive and unreliable electricity, an inefficient port, poor railways and insecurity discouraged potential investors in the sector.

Currently KTDA produces specialty teas to diversify sources of revenue. These teas trade in the international market at prices ranging between two and three dollars per kg, compared to 1.90 dollars per kg for ordinary teas.

Dr. Romano Kiome, permanent secretary in the agriculture ministry, concludes that ‘‘we need to develop special products for special markets. We need to put the consumer first rather than the farmer, as has been the case.’’