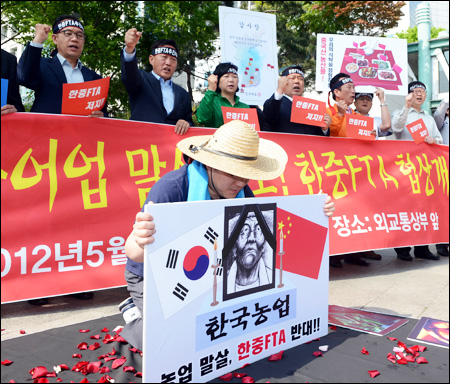 A member of the association of agriculture, fisheries and livestock industries holds a placard protesting the start of negotiations for a Korea-China free trade agreement in front of the Ministry of Foreign Affairs and Trade building in Seoul on 2012-05-03. / Korea Times photo by Hong In-kee

The Korean government revealed its intention to open the agricultural sector during the first round of the so-called “second phase negotiations” for a free trade agreement (FTA) between South Korea and China, showing its will to accelerate the FTA negotiation.

The eighth session of FTA talks between South Korea and China ended on November 22 after the two countries exchanged their initial offers for the level of liberalization of goods. The first round of the second phase of Korea-China FTA negotiations was held in Incheon, Korea since November 18.

The Ministry of Trade, Industry and Energy said in a press release on the same day, “In the latest round of negotiations, the two sides began discussions for a rough draft of the trade agreement and on the level of liberalization for products, based on the agreed modality.”

Later, Woo Tae-hee, Korea’s chief negotiator and assistant trade minister, held a briefing on the Results of the 8th Talks for the Korea-China FTA, saying, “Both Korea’s and China’s offers on the list of products to be liberalized under the envisioned FTA included some farm products that are considered not or less sensitive.”

The agricultural sector is considered to be the most sensitive area in South Korea, as many Korean people fear the FTA with China may lead to an overflow of cheap Chinese farm products into the local market.

The trade assistant minister went on to say, “There are two main points, the exchange of offers on the level of liberalization and the exchange of draft texts for the agreement,” adding, “China came up with its offers with more sincerity than we had anticipated, while the offers for the envisioned FTA were somewhat disappointing.”

The ministry said, however, that the 8th talks were meaningful in that the two countries concluded what they call the first phase of negotiations in early September after reaching an agreement on the basic guidelines for the FTA, including the level of market liberalization. Related with that, an official of the ministry said that the exchange of the countries’ initial positions on the level of liberalization itself marked a “good start.”

The ministry also added separate working group talks for all other areas including service and investment, intellectual property rights, competition and environment, and other areas that are subject to liberalization under the FTA.

The second phase of negotiations starting with the latest round will seek to map out a more detailed agreement by sector, such as products, services, investment, and employment. The next round of negotiations will be held in China on a date to be decided later.