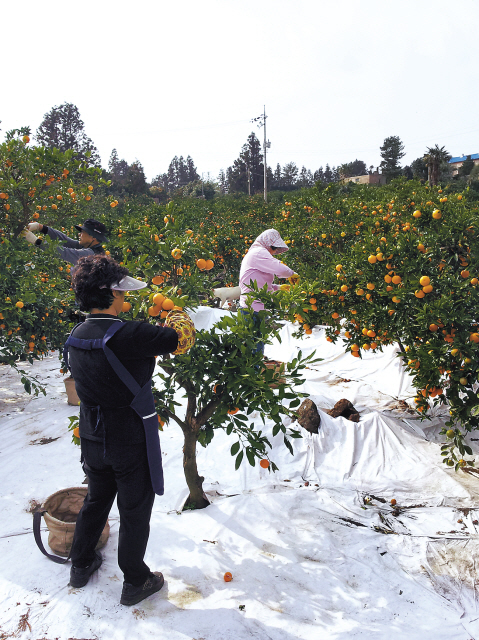 This is the second and last in a series on the impact of the potential Korea-China Free Trade Agreement on the local agriculture industry. Seo Ji-yeon contributed to this article. ― Ed.

With Korean and Chinese policymakers due to wrap up the sixth round of negotiations on a free trade agreement between the two countries in Busan on Thursday, thousands of agriculture workers from across the country have been marching through the city in protest.

More than 3,000 farmers wearing red protest headbands marched Tuesday from BEXCO toward Haeundae, where the negotiations were taking place, and planned to continue rallying against the FTA on the following days.

The protests came soon after both countries’ leaders, Korea’s Park Geun-hye and her Chinese counterpart Xi Jinping, last week expressed hopes of expediting the talks, which could take another 2-3 years to conclude.

Liberalizing trade with China is expected to boost Korea’s GDP by about 3 percent after a decade.

But agriculture is expected to take a hit, as farm production could fall about 15 percent in the same period, according to the Korea Institute for International Economic Policy. Another estimate predicts that if tariffs are halved, agriculture could lose some 2.77 trillion won ($2.4 billion) a year.

Park Jin-ho, CEO of The Delicious Haru, which imports and exports chicken products, does not aim to be one of them. Where small farmers expect overwhelming competition, his company ― which has expanded from trading to sales to production since 2002 ― sees a billion potential customers.

“Until 2010, China might have been considered the world’s factory, but since then China is seen more like the (market) with the largest consumption in the world,” said Park.

“Many people see the FTA with China as bringing a great threat to Korean agriculture, because they are worried that the cheap Chinese products will dominate the Korean market. … However, if we look at the situation from a different perspective, Korea will be granted a chance to enter the Chinese market of 1.3 billion people within two hours’ distance.”

Farmers and industry experts recognize that Korea cannot compete with China on raw goods such as rice, garlic and peppers, which are on average six times more expensive here than in China, according to Samsung Economic Research Institute.

Korean producers are stuck with the high prices due to limited production capacity: There are about 1.4 hectares of arable land per household here ― only enough to supply half the local food demand ― and the rural workforce is shrinking. The government acknowledges this and provides up to 2 million won per farmer a year to buffer the effects of competition.

Local growers face prohibitively stiff competition if they go head to head with similar goods. But what Korea lacks in price competitiveness, it can make up for in technological know-how, experts say.

As the more developed country, Korea can gain the upper hand by focusing on specialized, differentiated, high-quality goods as an industry growth engine, suggested Moon Han-pil, a lead researcher at the Korea Rural Economic Institute.

“The government is putting a lot of effort into converting the agricultural system to produce expensive but quality products,” he said. “With efforts such as standardizing the quality, our expensive agricultural products can survive among cheap imports.”

With certain Chinese foods, such as beef, citrus and dairy, facing mounting worries globally over food safety ― they are banned from entering Korea ― China’s growing upper class can afford to be choosy about what they eat. They are becoming more interested not only in safer imported alternatives but in specialty foods as well, Moon noted.

“The income level of rich Chinese consumers is even higher than rich Korean consumers, and the number of them is increasing. That means there is a possibility that expensive but high quality Korean products will sell well in China.”

Moon said the Korean cultural wave also led to a boost in demand for Korean food products such as banana milk, instant rice packs and ramen, especially throughout Southeast Asia, and predicted the same will begin to happen in China once access is easier.

Kim Ki-hoon, president of NongHyup-Jeju Citrus, said that China produces 30 million tons of citrus a year, which are virtually identical to those grown here. Kim hopes to make his products more appealing through specialization.

“We will continue to increase production of citron products with high competitiveness from 100,000 tons to 200,000 as well as modernizing our facility based on a scientific system in the hope of differentiating our products in the market. This will make our products even more competitive,” he said. “We are working on exporting citrus products especially targeting foreign tastes, such as seedless fruits that are easy to peel.”

Importing raw goods and re-exporting them as refined or processed ― and higher-priced ― products is another strategy Korea can use to create opportunity, said Troy Stangarone, senior director of trade at the Washington-based Korea Economic Institute of America.

“High-end and specialized food products would allow Korean farmers to earn higher margins on their exports,” he said.

However, Stangarone noted, intra-industry trade with China has its limits, as the country’s distribution network is limited and Chinese food processors still largely process for export rather than domestic consumption.

“To tap into this market, Korean exporters would likely need to develop distribution networks in China,” he added.

Even equipped with specialized goods and an open market, local companies still expect other barriers to entering China.

Kim Soon-jin, vice president of kimchi producer Hansung Food, said her company temporarily exported kimchi to a high-end department store in 2011, and sees a small potential to reenter the market once the FTA is effectuated.

“We expect to initiate exporting again to China, but there are a lot of difficulties such as the price difference between China and Korea, and freshness control.”

Hwang In-sik, a cattle farmer in Beopwon-ri, Gyeonggi Province, admits that “hanwoo,” the Korean beef cattle, only has premium value in Korea.

“I doubt the Chinese upper class would consume Korean beef,” he said. “If they can choose between Korean and Japanese beef, I bet that they’d choose the Japanese.”

Ryu Jung-do of Doowon NH, which exports citron tea to China and Japan, claimed that past “careless” government investments to promote small businesses led to oversupply in his sector. He suggested that the money would be better spent on improving the competitiveness of existing companies.

“I think they should be more careful and try to be more productive in terms of coming up with better-quality products, such as modernizing facilities, providing financial support and simplifying the administrative processes,” he said.

To its end, the central government aims to better address these problems and support the high-potential exporters with a 2.5 trillion won budget this year ― up 19 percent from last year ― to help businesses scale up, modernize, improve freshness control and create uniform food quality standards.

The government can subsidize an investment cost or provide a low-interest loan for farmers to upgrade their glass greenhouses with a warm water sprinkler system to prevent freezing in the winter, for example, or waste filtering systems in animal sheds to improve hygiene and animals’ well-being.

The Ministry of Agriculture said its activities are based on three key objectives to strengthen competitiveness and productivity of the nation’s industry: attracting investment, promoting research and development, and increasing capacity.

“Under the ministry’s policy direction, state-run corporations in the agricultural sector … run a variety of programs to increase exports of local agricultural and food products,” said Kim Chang-gook from the state-run Korean Agro-Fisheries and Food Trade Corp. “We run overseas sales and marketing support programs and establish logistics facilities overseas.”

For Park of The Delicious Haru, much of the fear of doing business in China stems from hearsay and outdated information.

“I have visited around 20 cities in China to see whether our chicken products can compete in the Chinese market,” he said. “Almost 10 out of 10 Koreans think China’s chicken products are cheap, but actually they are not.”

He says one problem for potential exporters is the scarcity of up-to-date information on China’s agriculture sectors, but market research could include just going to any street market in China or watching what Chinese tourists in Korea buy.

He suggests that the best the government can do is maximize local agriculture businesses’ power of information.

“Our competitive advantage is the information we have,” he said. “I think the most serious problem among Korean farmers is that their judgment depends on rumors and what other people say.”

He suggests that the government should help to develop a realistic China industry map to share with local farmers, noting that it would lead them to have productive discussions about their own industry.

“Then they can come up with better solutions on their own.”