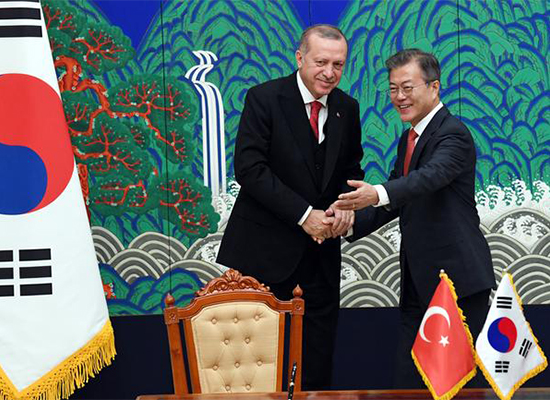 A free trade agreement between South Korea and Turkey expands to the services sector and investment from Wednesday, raising more business opportunities for Korean contents and builders in the transcontinental country.

The Ministry of Trade, Industry and Energy said on Tuesday that the two governments have completed administrative procedures to effectuate the expanded FTA signed in June from Aug. 1

The latest agreement calls for enhanced protection standard allowing stable corporate investment as well as opening up of cultural service sector such as of Turkey’s movie, performance, and construction areas.

In the latest agreement, Korea and Turkey agreed to open up the services industry to a level higher than that of the Doha Development Agenda (DDA) among the World Trade Organization (WTO) membership. Turkey promised to open up its market by higher level than the DDA concession in 18 areas including construction, culture, and environment.

An unnamed ministry official said that the latest agreement will help enhance investment protection level of Korean companies participating in large-scale infrastructure projects in Turkey such as the Canakkale Bridge project.

Korea and Turkey signed the bilateral agreement covering service and investment sectors in February 2015, two years after their FTA on goods took effect. The deal had been stalled by conditions in Turkey.

The services and investment agreement will apply to all measures affecting bilateral services and trade excluding some fields such as coastal marine transportation, government procurement, subsidy, and state-provided services.

By Ko Jae-man and Lee Eun-joo