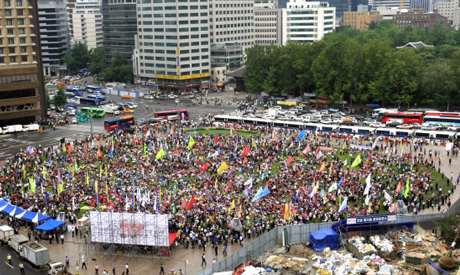 Tensions increased this week in the Haeundae Beach area of Busan with farmers and fellow protesters rallying against continuing FTA negotiations between Korea and China.

BUSAN, South Korea — There was a lot of tension in connection with the Korea-China FTA negotiations being held for three days in Busan this week. Rallies of opposition groups including farmers coincided with a visit from the Chinese trade delegation.

The agriculture, fisheries, livestock emergency measure committee for Korea-China FTA and Gyeongnam Agricultural Organization committee said they held the resolution meeting to prevent continued FTA negotiations between the Northeast Asian neighbors. The groups contend that if a Korea-China FTA is reached, the damages to agriculture and fisheries industries will be devastating.

An estimated 3,200 protesters from across the country attended the rally in front of the BEXCO convention center, a few kilometers from the negotiation venue in southeastern Busan. The organizers themselves put the number of participants at about 6,000 according to Yonhap News.

Wearing red protest headbands, the demonstrators shouted angry slogans and pumped clenched fists while marching with signs, saying such things as "Korea-China FTA is the death sentence to Korean farming."

The demonstrators later marched toward the hotel on Haeundae Beach where the negotiations were under way. Some of them attempted to enter the venue, but were blocked by a large contingent of riot police who had been bussed in for the event. After a roughly 90-minute standoff with police, the protesters voluntarily dispersed.

Three protesters were briefly detained and there were no serious incidents.

This week’s talks are the sixth in their series and come shortly after South Korean President Park Geun-hye and Chinese President Xi Jinping agreed at a summit last week to step up efforts to complete the free trade deal The two countries launched official free trade negotiations in May last year.

The protest organizers claim that an FTA with China would cause Korean farmers and fishermen to lose upwards of US$25 billion over the next 15 years.