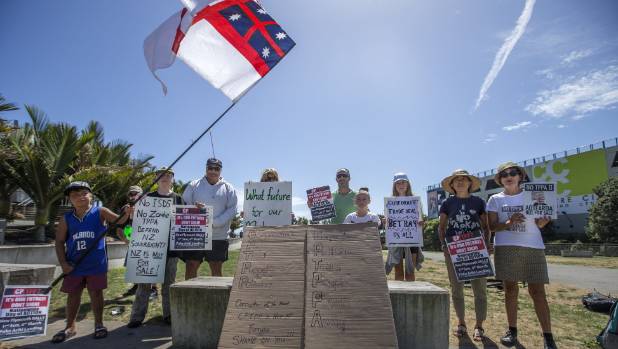 Left for dead, a mega trade pact rises from the ashes

The Trans-Pacific Partnership, also known as the TPP, has risen from the dead.

In one of his first acts as President, Donald Trump pulled out of the massive trade pact, which linked countries from Australia to Japan, Mexico to Vietnam. The TPP faced a grassroots uprising against it.

On March 8, however, eleven countries—minus the United States—signed a revised version, known as the Comprehensive and Progressive Agreement for Trans-Pacific Partnership. The new agreement—although relieved of some clauses related to intellectual property—is essentially the same. And the lost clauses could reappear should the United States rejoin, which might happen.

The Comprehensive and Progressive Agreement for Trans-Pacific Partnership may include “progressive” in its name, but progressive groups around the world are not aligning to support it. Rather, they remained concerned by weak labor and environmental provisions.

What caused the TPP to rise anew from what seemed certain death? Pressure from Japan and Australia were instrumental.

“Both of those conservative governments . . . wanted to preserve [the TPP] in the hope that a future U.S. government will return to the deal,” Patricia Ranald, convener of the Australian Fair Trade and Investment Network, tells The Progressive.

“With the Trump victory, there’s a belief among the neoliberal class that protectionism is on the rise,” agrees Sujata Dey, trade campaigner for the Council of Canadians. She adds that TPP proponents want a victory for free trade.

Among the opponents to free-trade agreements are rightwing populist elements, which rallied to support Trump’s bid for the White House. These elements are buoyed by a risky notion of nationalism, which Trump is playing to by raising tariffs for steel and aluminum. Trump, “is using the bargaining power of the United States to gain short-term advantage without regard to longer term impacts on the country and on the global trading system,” Ranald says.

The result may be a global trade war that hurts everyone.

Meanwhile, opposition to the new trade deal on the left, while far from uniform, is rooted in a globalist perspective supporting more equitable agreements, constructed from the ground up and with strong protections. Rather than building walls between countries, much of the progressive left wants international equity for workers and global protections for the environment.

Progressive critics of the deal most despise the Investor State Dispute Statute (ISDS), a feature of many free trade agreements that allows corporations to seek damages from countries they believe have interfered with their right to profit. “ISDS enables foreign investors to bypass national courts and sue governments in international tribunals which have no independent judiciary, no precedents and no appeals,” says Ranald.

Laws meant to protect environmental and worker rights could be subject to huge financial penalties. Manuel Perez Rocha of the Institute for Policy Studies, cites the North American Free Trade Agreement (NAFTA), ratified in 1993. In an early 1997 case, Mexico prohibited a firm from constructing a toxic waste dump, which led to a $16 million fine. Essentially, Perez Rocha says, this meant that Mexicans “ended up paying for” maintaining a clean environment.

Subsequently, the consequences of NAFTA and similar free trade agreements has only gotten worse. “Mexico has had to pay more than $200 million already, and at the moment is subject to about $2 billion in these kinds of suits,” Perez Rocha says.

This can be multiplied by similar suits around the globe under free trade agreements using the same model as NAFTA.

NAFTA has had other harmful impacts in Mexico. According to Perez Rocha, American agricultural firms “dump corn, beans, and other grains into Mexico and destroy the livelihood of millions in the countryside.” This has spurred immigration to the United States, adding to the backlash against immigration. And Mexican small businesses have been destroyed by the intrusion of American retailers including Walmart.

While Donald Trump argues that Mexico has stolen American jobs under NAFTA, Perez Rocha says the real problem is “the relocation of companies to where they can profit more, provoking massive dislocation.” The new version of the TPP only threatens to accelerate this process.

And Perez Rocha rejects the neoliberal argument that job losses in Mexico from NAFTA are merely the churn of capitalism, which ends up creating more wealth than it destroys. “In Mexico it is very clear that the millions of jobs lost, millions of livelihoods lost, have not been made up by the creation of new jobs,” he says. While NAFTA “has made some sectors more efficient, in the end the modernization of technology has made many, many jobs redundant.”

Going forward under the new TPP, Perez Rocha fears Mexico will lose textile-related jobs to countries like Vietnam, and that its dairy industry will likely suffer. International investments in mining, fracking, and oil may increase, without adequate environmental safeguards. And changes to regulatory and intellectual property rights, although not as extensive as in the earlier version of the TPP, likely “will make medicines much more expensive.”

There is still a chance that the new TPP will not take effect. For that to happen, the agreement must be ratified by six of the eleven signatories. Dey and Ranald perceive tough ratification processes in Canada and Australia, against the same groundswell of opposition that hindered the original TPP.

Perez Rocha, by contrast, sees an easy ratification in Mexico, but timing is everything. Mexican elections are scheduled for July 1, and a progressive reformist is currently favored to win.

What’s needed, says Dey, is a better TPP built from the ground up, with enforceable labor and environmental standards, global targets to mitigate climate change, and progress on gender issues and indigenous rights.

Ranald also calls for critical protections against forced and child labor, and adequate standards that are “legally enforceable through government to government disputes in the same way as other TPP chapters.” Numerous suggestions for specific changes are gathered at the Alternatives for America website.

The stage is thus set for a global showdown regarding the future of trade. Stopping the latest iteration of the TPP may be difficult, but it is possible. The harder part, in a world caught between a beleaguered neoliberalism and an angry populist nationalism, will be building strong trade agreements that include a bulwark of international rights and protections.

Ethan Goffman is an environmental writer and national reporter for Mobility Lab.