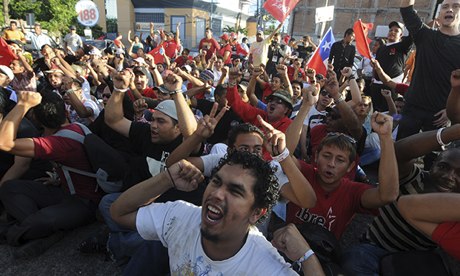 Look to Honduras for reasons the TPP will fail

The U.S. government claims the labor protections in the Trans-Pacific Partnership are “gold standard,” but we need to look no further than Honduras to see how inadequate and unenforced labor obligations endanger workers’ lives and weaken workers’ rights.

Despite having labor protections in the Central America Free Trade Agreement, Honduras continues to skirt laws on workplace safety. Local union members across Honduras banded together with the AFL-CIO to file a CAFTA complaint back in 2012. As a result, the United States has pushed Honduras to enact a new labor inspection law. Yet, the current draft of this new law contradicts the International Labor Organization’s technical advice and clear, direct, and unanimous input from Honduran workers.

The draft law proposes a largely voluntary system to "promote compliance" that registers companies as participants prior to any actual workplace inspection. Can you imagine if U.S. workplaces had a choice in whether to comply with basic safety laws? We don’t let the fox guard the henhouse here in America, so why will we tolerate it for countries we trade with (particularly when so many factories abroad make U.S.-branded products to be sold in the U.S. market)?

The draft law in Honduras provides no schedule for performing actual inspections in all workplaces. The government is choosing to ignore basic workplace protections, despite these measures being included in CAFTA. By the government’s own admission, at least 70% of companies are currently not complying with these measures. In some industries, like agriculture, nearly 100% of workers make less than the minimum wage. By definition, this is a violation of CAFTA because it is ineffective enforcement of a labor law.

The Honduran government also wants to make anti-union discrimination even more easy and pervasive than it already is. Labor leaders who stand up to these corporations risk being fired under the proposed law. A U.S. stamp of approval on such a move would make CAFTA a force for worker harm.

Aside from an immediate negative impact in Honduras, such a law would provide a bad example for countries in the region that often compete in a race to the bottom based on low labor standards. Proposed agreements like TPP depend on the same broken system to protect workers’ rights—too much discretion and too many delays.