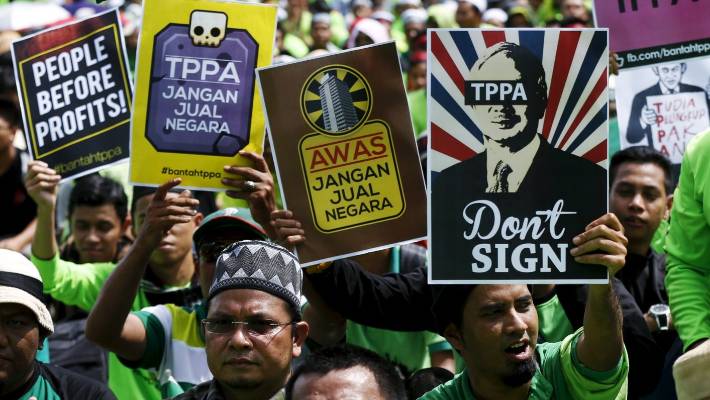 Malaysia will not be pressured into ratifying a 11-nation Asia-Pacific trade deal it signed up to under the scandal-tainted former prime minister Najib Razak, its trade minister said on Thursday, as he raised the prospect of holding out for bilateral tariff pacts instead.

Darell Leiking’s comments in an interview with the South China Morning Post come ahead of a ministerial meeting between the 11 trade ministers of the Comprehensive and Progressive Agreement for Trans-Pacific Partnership (CPTPP) this weekend.

Leiking’s government, led by the 93-year-old Prime Minister Mahathir Mohamad, has been criticised by free trade proponents of dragging its feet over ratifying the multilateral deal – especially after it came into effect for six of the 11 countries at the start of the year.

Vietnam this week became the seventh country to ratify the pact, meaning it can now enjoy a major reduction in tariffs with others on board with the deal.

The 11 countries – four from Southeast Asia – make up a market with a GDP of US$10 trillion and a population of 500 million people.

It would have been larger had it not been rejected by US President Donald Trump. He pulled his country out of the deal within days of coming to office in 2017.

Leiking, speaking to the Post in Hong Kong, said there was much for Malaysia to deliberate before his government fully moved ahead in participating in the pact.

“There’s nothing really to stop Malaysia,” Leiking said. “Rather, this CPTPP was signed before we took over the government and our eight-month-old government [is doing its] own analysis on what was decided before we became government, and how we can fit it into the current policy that we have.”

The minister raised the possibility of striking bilateral deals with CPTPP countries with which it currently does not have trade pacts.

The 11 countries include three other Asean (Association of Southeast Asian Nations) members with which Malaysia already has a multilateral trade pact with: Singapore, Vietnam and Brunei.

And another Asean-backed trade pact, the Regional Comprehensive Economic Partnership (RCEP) – which observers say may soon be signed – will include Japan, Australia and New Zealand – three CPTPP signatories.

That leaves just four other countries – Canada, Mexico, Chile and Peru. “What’s stopping me from having a bilateral with them,” Leiking said, referring to these countries.

He said critics attacking the government “left, right and centre” over the matter should remember his country was a federation that needed the assent of its three constituent territories before laws were amended to ratify the CPTPP.

Malaysia is made up of peninsula Malaysia and the Bornean states of Sabah and Sarawak.

Leiking said 19 national level laws needed to be amended, along with other regulations.

While some observers have said Malaysia can give “notification of ratification” as he deliberates on amending these laws, Leiking disagreed.

“In order for you to have the legal standing to ratify, you would have first amended all the laws of your country to fit with the agreement that you have entered in the CPTPP,” the minister said in the 45-minute interview in the Post newsroom.

The minister hinted his government was being persuaded by countries that have already ratified the deal – Singapore, Vietnam, Australia, Canada, Japan, Mexico and New Zealand have done so – to speedily join them.

Said Leiking: “If they pressure us on CPTPP, you have already ratified it. There’s already seven nations that have ratified it. And it’s working for you, good … Maybe there are certain people who would not like us putting our stance on something”.

Critics who were pressuring Malaysia may not be looking at his country’s circumstances accurately, he said, and questioned why similar questions were not posed to Brunei, the other Southeast Asian CPTPP holdout.

Some trade observers have said Malaysia is reticent to ratify the CPTPP because of concerns that it must then unwind its decades-old affirmative action policy for its majority Malays – referred to as the bumiputera (sons of the soil) policy.

Leiking said this was not the case, as the Najib government voted out in last year’s election had successfully negotiated a “carve out” for Malaysia on the matter.

“So while we are happy with most of the terms, there are terms that we have to relook at,” Leiking said.

Deborah Elms, a consultant on multilateral trade affairs, said that “in a nutshell” Najib’s involvement was “the reason for the delay”.

“Whatever the old guy wanted must have been a bad idea,” said the executive director of the Asian Trade Centre.

“I suspect many have an unexpressed concern that the CPTPP must also mean the dismantling of preferential programmes for bumiputera firms and greater internal competition. As it happens, the previous government did an impressively good job of keeping in place most of these government supports and preference programmes in the end.”