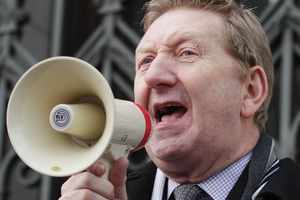 "Contrary to the campaign of spin and disinformation coming from the European Commission and our own Tory Government, TTIP could make the privatisation of health services irreversible." General Secretary of the union Unite, Len McCluskey.

The leader of the country’s biggest union has written to all UK MEPs urging them to vote against a controversial EU-US trade deal if the NHS is not exempted. General Secretary of the union Unite, Len McCluskey.

Len McCluskey, general secretary of Unite, said there had been an orchestrated campaign of "disinformation" over the Transatlantic Trade and Investment Partnership (TTIP), claiming it would lead to privatisation of health services in the UK.

The Government has denied the claim, insisting a deal would boost trade, create jobs and help small businesses.

Unite said the letter and briefing to all UK MEPs will add pressure on David Cameron and on Brussels negotiators ahead of the next round of TTIP talks.

Mr McCluskey said: "There is a real and growing movement opposed to this dangerous deal.

"When people learn about TTIP they get angry and expect David Cameron to use his veto to protect the NHS.

"If the European Parliament is to have any legitimacy, MEPs must recognise that it is their job to reflect this anger, not the interests of Wall Street.

"All MEPs have received a briefing which separates rhetoric from reality by revealing the full threat TTIP poses to the NHS. Contrary to the campaign of spin and disinformation coming from the European Commission and our own Tory Government, TTIP could make the privatisation of health services irreversible.

"When the final agreement comes before the European Parliament, MEPs must reflect the concerns of their citizens and vote it down if the NHS has not been exempted."