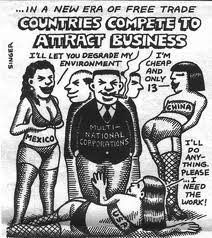 Mexico envisions a trade deal tying it to the European Union, U.S. and Canada as the future of transatlantic commerce and would welcome joining talks between the U.S. and EU, Foreign Minister Jose Antonio Meade said.

An agreement that binds the nations of the North American Free Trade Agreement to the EU, the world’s two largest free- trade areas, makes the most sense because it would leverage the economic power of the Nafta nations, Meade said. Mexico already has a free-trade deal with the EU, while Canada and the U.S. are each negotiating their own trade deal.

Having each nation in a separate bilateral agreement with the EU wouldn’t “take full advantage of the economies of scale and scope that have resulted from Nafta,” Meade said in an interview yesterday in Washington. “We would be very willing to participate from the outset if from the outset it would be made to be something regional rather than bilateral.”

The U.S. and EU are aiming to complete trade talks within two years on a deal that would expand their economic relationship after President Barack Obama promised in his State of the Union speech to pursue an agreement. The 27-nation EU says the accord will seek to lower tariffs, ease regulatory barriers and expand access in investment, services and public procurement, among other steps.

The EU says a deal with the U.S. could add 86 billion euros ($111.7 billion) a year to the bloc’s economy. While trade and investment between the U.S. and the EU was valued at $4.5 trillion in 2011, the two governments have been at odds over issues including farm subsidies, health protections and regulatory standards.

Nafta went into effect in 1994, and in October Mexico and Canada joined U.S.-led negotiations for a Trans-Pacific Partnership that include eight other nations in Latin American and Asia.

“We think that in terms of trade, as well as in other contexts, a North American perspective works,” Meade said.

In an interview on March 21 at Bloomberg’s Mexico Economic Summit, Economy Minister Ildefonso Guajardo said that President Enrique Pena Nieto, who took office Dec. 1, met with Jose Barroso, head of the European Commission, and European Union President Herman Van Rompuy, and that they agreed to work on updating the Mexico-EU free-trade agreement that took effect in 2000.

Canada and the EU are also working on a trade deal. Canadian Prime Minister Stephen Harper on March 14 said that while the sides have made “significant” progress, important issues need to resolved before the accord is finalized. It would be an advantage for Canada to sign the agreement with the EU before the U.S. signs one, Harper said during a joint news conference with French Prime Minister Jean-Marc Ayrault in Ottawa.

“It probably is the case that one can start by having the three bilateral agreements, but I think the region would benefit if at some point we keep in mind that a superior equilibrium can be reached if the negotiations were North America toward Europe rather than bilaterally each one of us with them,” Meade said.